O’Reilly makes fresh bid for US recognition of bankruptcy 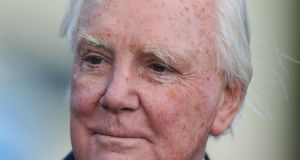 Sir Anthony O’Reilly: says he is married to a Bahamian citizen and has been a permanent resident in the Bahamas for more than 20 years. Photograph: ©INPHO/Lorraine O’Sullivan

Sir Anthony O’Reilly has begun a fresh attempt to have his bankruptcy in the Bahamas recognised in the US courts in order to block his former personal nurse suing him there.

In a new court application to Pennsylvania’s bankruptcy court, the former billionaire is seeking legal recognition of his Bahamian bankruptcy as a “non-main” foreign proceeding, meaning that the Atlantic archipelago is where the one-time media tycoon has a place of operation rather than being his home country.

Sir Anthony’s former personal nurse Sabina Vidunas successfully blocked his application for recognition of his bankruptcy on the basis that the Bahamas was not the centre of his main interests.

Ms Vidunas is suing her former employer for reneging on a promise to pay her millions of dollars in company shares after hiring her in 1995. She ended her employment with the businessman in 2010 or 2011.

Sir Anthony has argued that her claims have “no merit in fact or in law”.

The businessman has issued a counterclaim against Ms Vidunas for the repayment of a $1.4 million loan made by Sir Anthony to his former assistant to buy a house in Lyford Cay in the Bahamas.

The Pittsburgh-based court concluded last month that Sir Anthony did not have sufficient present connections to establish the Bahamas as his “centre of main interests” and that this was, in fact, France.

In a declaration filed in court this week, Sir Anthony says that he is married to a Bahamian citizen and has been a permanent resident in the Bahamas for more than 20 years.

The retired businessman submitted a certificate of permanent residence dated August 1993, which includes photographs of Sir Anthony and his wife Chryssanthie Jane O’Reilly at the time.

Sir Anthony (82) said in his declaration that he has lived for decades in the Bahamas and intended to continue being a resident there indefinitely.

“I have spent time in France at a holiday home. I am not a citizen of France nor have I sought permanent residence status in France,” he said.

Financial difficulties forced the former Independent News & Media and Heinz chief executive to file for bankruptcy in the Bahamas in 2015 with assets of €23 million and debts of €170 million.

Sir Anthony’s bankruptcy trustee, Alastair Beveridge, a UK insolvency practitioner, asked the US court this week to recognise the Bahamian case and to block Ms Vidunas’s legal action in Pennsylvania.

Mr Beveridge told the court that Sir Anthony had “serious health issues which require ongoing medical supervision and treatment, and whose attending physician has restricted his travel”.

1 Chris Johns: Ireland risks populist culture war over property and pensions
2 Javid’s EU divergence plans provoke industry backlash
3 Big spending election promises and Dublin hotel room taxes
4 Inbreeding poses major threat to Ireland’s thoroughbred horse sector
5 ‘Life in Vilnius reminds me of Ireland in the 1990s’
6 GoMo is being investigated by advertising authority
7 ‘I’ve always found it easier to convince the bank to lend me money than to save’
8 Irish people like nothing more than being bribed with their own money
Real news has value SUBSCRIBE