US bankruptcy trustee to call Dunne and Killilea at May trial 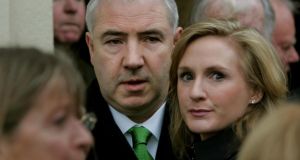 Bankrupt developer Seán Dunne and his wife Gayle Killilea are among dozens of potential witnesses listed to testify at next month’s trial of the legal action taken against him by his bankruptcy trustee.

US trustee Richard Coan is claiming Mr Dunne fraudulently transferred tens of millions of euro worth of assets to Ms Killilea. The assets including cash and various properties including Ireland’s most expensive house, Walford on Shrewsbury Road in Dublin, bought by Mr Dunne for €58 million in 2005.

Mr Coan is seeking the recovery of the transferred properties or their value in the long-running legal action in the US District Court in Connecticut where Mr Dunne filed for bankruptcy six years ago.

Mr Dunne and his co-defendants, Ms Killilea and his son John Dunne, along with several companies, deny any financial fraud in the transfer of various properties, including lands in Dublin. They claim the Co Carlow developer made the transfers to his wife before the crash when he was worth several hundred million euro.

The trial is set to begin at the start of next month in New Haven and is scheduled to run for several weeks.

The 64-year-old Carlow businessman, one of the highest-profile builders of the Celtic Tiger property boom, filed for bankruptcy in the US in 2013 with debts of about €700 million after relocating to Connecticut.

He was also adjudicated a bankrupt in Ireland later that year and has since been embroiled in legal actions on both sides of the Atlantic as his bankruptcy officials seek the recovery of assets to repay his creditors.

Among the witnesses to be called by the trustee at the trial are Alan Stewart, an official at the National Asset Management Agency, the State loans agency that acquired Mr Dunne’s bad debts from the Irish banks.

According to a 135-page pre-trial document, Mr Dunne, who is listed as living at an address in Winkfield in Berkshire, England, may testify for two days, depending on how long he is cross-examined.

It is anticipated that Ms Killilea, with an address at Engham in Surrey, will testify for one or two days. Mr Dunne’s son John, who lives in New York City, will also be called to testify.

The trustee would intend some witnesses, including Mr Dunne’s first wife, Jennifer Coyle, but he told the court he believes they may currently be beyond the subpoena power of the court.

Another witness whom the trustee says he may call is Irish-American businessman John Breslin, the Co Meath native who co-founded the Safway Atlantic scaffolding business in New Jersey. The court filing says Mr Breslin will be questioned on any assets transferred by him to any of the defendants or received from them.

Ms Killilea intends to call expert witnesses who include Prof John Wylie, a leading authority on Irish property law, to share his opinions on the Walford transfer, and retired US judge Steven Rhodes, to discuss Ms Killilea’s transactions and whether such transfers are normal in business practice.

In a court ruling last week, US district judge Jeffrey Meyer denied the trustee’s motion to hold Mr Dunne in contempt for failing to hand over emails ahead of the case, as recommended by a magistrate judge.

The judge found Mr Dunne’s loss of electronic records was “negligent” and instead imposed sanctions for his “discovery misconduct” including paying the legal costs incurred by the trustee for the discovery process.