Nearly one year into the pandemic, we still know so little

Caveat: From February 2020 reports, it is almost quaint how wrong we all were 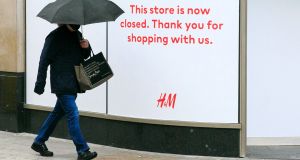 Closed H&M shop on Henry Street: No country in Europe has developed a model for living with the virus. Photograph: Gareth Chaney/Collins

It is one year since I started writing about coronavirus in these pages. In that time, the world has been turned upside down and inside out. Each time that it has seemed as if the State may have a handle on the pandemic, the story has jerked violently in yet another unexpected direction.

Many in business hoped the worst was over by last summer. Yet even the darkest fears of what might lie ahead for winter were subsequently exceeded. We are still living that out, each and every day.

Our experiences to date, together with the knowledge that the pandemic has repeatedly outpaced all predictions of its path and effects, should spur a little humility in each of us, of every hue. But looking back at articles from last February, it is striking how much we all thought we knew back then, and how wrong much of it would be proven in time.

My introduction to the novel coronavirus was similar to most other Irish people’s – throughout January I saw harrowing footage from China of people dying in hospital corridors and locked into their apartments. Yet it still seemed to be a story that was far, far away: there was no sense among the Irish public that it was only weeks away from changing our way of life.

The first time I thought to mention it in print was in a stock market report published on February 5th. The Chinese central bank had just stepped in to pump its economy full of cash and it calmed markets globally.

On that day, Ryanair shares rose 1.5 per cent to about €16. Remarkably, given all the turmoil that has followed for aviation, it remains at that level a year on. Perhaps Ryanair’s investors scent its rivals’ blood.

By February 10th, there was a realisation in reports on Irish tourism that growth plans could be affected by the absence in 2020 of high-spending Chinese travellers. But by February 12th, we were back in fantasy land: Zhong Nanshan, China’s foremost medical adviser on the virus, predicted it would all be “over by April”. Market traders in Europe almost collapsed in relief.

As it turned out, Zhong was broadly correct in terms of the virus’s impact on China. For the rest of us, it hadn’t even started.

By February 26th, as the rest of Europe looked on in horror at what was happening in Italy, the potential impact of the virus was being weighed in Irish stock market reports on companies such as Dalata, the largest Irish hotel operator. By the 28th, I wrote my first dedicated column on what I perceived to be a mortal threat to the Irish tourism and hospitality sector.

I had identified the correct issue but spectacularly misread the nature of the risk. I focused at the time on the risk that the virus might stop US tourists from visiting Europe, and compared it to the first Gulf War, when their visitor numbers here dropped by 20 per cent. Little did I know that Ireland’s entire international travel season for 2020 and 2021 was already stillborn by that stage.

The following 10 days were a blur. The Government and public health authorities cancelled the Ireland-Italy rugby game but inexplicably dithered over stopping flights from Italy and cancelling the St Patrick’s Day festivities.

On March 2nd, the State’s confusion over what lay ahead was apparent in an interesting press conference exchange between Tony Holohan, the chief medical officer, and Daily Mirror reporter Ciara Phelan.

She grilled him over the wisdom of the Department of Health hosting an international conference that week just as a pandemic was beginning. He waved away the concerns and said: “I’ll be attending that one myself.” It is almost inconceivable now to think that was State attitude at the time.

Observations about the impact of coronavirus on businesses and the economy have dominated these pages since. Like most journalists, I have learned much, most notably just how uncertain everything will remain until vaccines kick in and the pandemic has been tamed.

One of the most depressing things I have come to realise over a year of writing about the pandemic is just how quick we are as a society to deploy social shaming as a tool of mass control. Perhaps Ireland has always been that way and our society hasn’t changed as much in recent years as it likes to think it has.

This characteristic was apparent on many occasions during the pandemic in grainy mobile phone footage of people – usually young people – engaging in activities deemed verboten, and who were then roundly condemned in performative fashion. At times, the State has appeared almost to weaponise the dubious power of public shaming, harnessing it to make us police each other and corral our behaviour. I understand the impulse, but in the long run I don’t believe this tendency will serve us well.

Another thing that has become obvious is that no country in Europe has developed a model for living with the virus. At best, we can only limit its public health and economic effects while we wait for a medical solution.

There has been a debate, ad nauseam, about whether the virus can be eliminated with the “zero Covid” approach adopted by New Zealand. I believe that theory was always deaf to the bespoke geopolitical circumstances that mean such a level of border control here is neither desirable, nor possible.

Those who advocate it are genuine. But much of the public’s embrace of the message is, I believe, driven more by fear than by reason. Hopefully, a lingering fear of outsiders does not remain in our mindset after the pandemic is gone.

Finally, most of us have realised over the past year or so the extent to which those who work in hospitality and retail, in particular, are central to our way of everyday life. Public health workers are rightly lauded for saving lives and treating the sick. But that esteem always existed – we just needed to be reminded of it. Hospitality and retail workers may be less important than doctors and nurses but most of us now realise just how important they are to the rest of us, as we strive to maintain the colour in everyday interaction.

When those workers have returned to their posts this time, we will know we have the virus on the run.