Mortgage approvals on the rise but loan values decline

New figures show 3,875 approvals in August, of which first-time buyers accounted for 58% 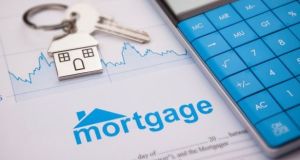 The number of mortgage applications approved last month rose by 14.1 per cent compared to July, and was up 11 per cent year-on-year, new figures show.

Overall 3,875 mortgages were approved in August, of which first-time buyers accounted for 58 per cent of the total volume.

The value of mortgages approved totalled €946 million, up 16.7 per cent versus July but down 2.3 per cent compared to August 2019.

Residential investment letting approvals were down 43.5 per cent versus August 2019 to just 78.

Remortgage/switching volumes declined 20 per cent year-on-year to 376, while top-up approvals fell 46.7 per cent to 162.

There were 39,610 mortgage approvals in the 12 months to the end of August, down 1.2 per cent versus the previous year in terms of volume and 0.24 per cent lower in value terms.

Annualised purchase mortgage approval volumes fell by 0.77 per cent compared to the prior period to 31,622, while the value was down 0.06 per cent to €7.6 billion.

“Following on from a strong uplift in mortgage approval activity in July compared to the previous month, this further uplift in August provides a much-improved pipeline for mortgage drawdown activity in the months ahead, notwithstanding the fact that overall activity is still down year-on-year,” said Dr Ali Ugur, chief economist with Banking and Payments Federation Ireland, which compiled the figures.

“We know that actual mortgage drawdowns were down by around 18 per cent year-on-year in the first half of 2020, and this comes as no surprise in light of Covid-19. But if recent approvals convert into drawdowns as they normally do, we could expect to see a better outcome than originally estimated back in April/May,” said Dr Ugur.

1 Admission of mistake in Oxford vaccine dose raises doubts over reliability
2 Move to EU or face disruption, City of London is warned
3 Cliff Taylor: Deal or no deal we are now heading for a hard Brexit
4 Last orders for Rí-Rá and Globe as Central Hotel gets green light to expand
5 Karlin Lillington: How I managed to cut my mobile phone bill by at least half
6 Fiona Reddan: Who’s afraid of Revolut? Not AIB and BOI it seems
7 Irish Life fund pays €49m for 94 Dalkey apartments
8 German watchdog reports EY to prosecutors over Wirecard audit
9 Lahinch Golf Club runs out of its own cash after €3m Covid-19 hit
10 An Post parcel volumes to hit weekly record of 3.3m
Real news has value SUBSCRIBE