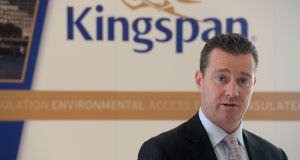 Insulation specialist Kingspan is buying a Slovenian business that makes roofs and facades, it has emerged. The news comes as Cavan-based Kingspan prepares to report first-half results for 2020 on Friday.

Kingspan did not comment on the deal while reports said that the parties agreed not to reveal the price or other details of the agreement.

It is understood that Trimo, which has operations in Slovenia and Serbia and sells its products in 60 countries, earns revenues of some €100 million a year.

The business has 10 per cent of the European market for some of its products, making it the second largest player in those businesses.

Subject to regulatory approval, reports predicted that the acquisition could go through in the final three months of this year.

Trimo chief executive Božo Cernila said the company is “excited” at the prospect of joining Kingspan. The Slovenian player believes that the Irish group’s distribution network, combined with the savings offered by becoming part of the bigger business, will boost its growth prospects.

Results for first half of year

Kingspan regularly buys rivals to grow its own business. However, chief executive Gene Murtagh has said it will only do deals that it believes offer the group good value.

Investors are likely to watch Kingspan’s results for the first half of the year carefully, as they will cover the period when construction was shut down in many of the Irish company’s key European and global markets.

At the end of April, Kingspan said that its sales slumped 35 per cent that month, a normally busy time of year.

Coronavirus lockdowns had frozen building in many countries during April. That included the Republic, where construction was down 80 per cent as the Government ordered that all but essential projects should halt in an attempt to curb spread of the virus.