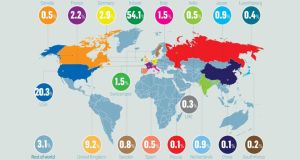 US technology giant Microsoft has become the largest company in Ireland for the first time, according to the The Irish Times Top 1000 Companies 2015 survey.

With an annual turnover of € 19.8 billion the software specialist, which is also enjoying considerable success in hardware with its recent launch of the Surface tablet, has knocked Irish construction materials company CRH back into second place.

Annual revenue growth of 32 per cent saw Microsoft move into the top spot, as the company, which reports in US dollars for its Irish operation, benefited from a strong euro conversion rate. Microsoft employs some 2,000 people at its Sandyford base in Dublin.

Also on the move is Google, which has slipped one place to third. New in the Top 10 this year is Irish-headquartered pharma group Medtronic (fourth), which may challenge Microsoft for the top spot in 2016, thanks to its acquisition earlier this year of Dublin based Covidien.

Irish names featuring in the Top 10 include DCC (5) and Smurfit Kappa (9).

Other notable movers in the survey include US social media giant Facebook, which has climbed nine places to 28th. Turnover at its Dublin operation has increased 12-fold since it first opened its office in 2009 and stood at almost €3 billion in 2013.

Going in the opposite direction is Tesco, which slipped 10 places to 30th, as the beleaguered grocer continued to report a reduction in sales in Ireland.

Overall, the survey shows that Ireland’s top companies are in recovery mode, with 65 per cent growing their sales in their most recent financial year, up 5 per cent on the 2014 survey.

Profitability among Top 1000 companies has also improved, with total net profits standing at €15.9 billion, up 33 per cent from €12 billion last year.

The turnaround in the banking and financial sector has been quite dramatic, the survey shows, with banks and financial institutions recording a net profit of €7.1 billion, compared with a loss of €1 billion in last year’s survey.

Bank of Ireland, AIB and Ulster Bank all made profits for the first time since the crash, while BoI has replaced Bank of America Merrill Lynch, which continues to downsize its Irish operation, as Ireland’s largest bank.

However the most profitable organisation in Ireland, with profits in excess of €2 billion, is the Central Bank. Since 2009 the bank has made a staggering €8 billion in profits.

Gold prices edge up as dollar slips 06:34
Motor tax hikes, D’arcy quits politics for IAIM, and Sprout’s takeaway pivot 06:30
State should use Covid-19 impact on construction costs to build new homes 05:30
Me & My Money: ‘Money can’t buy you happiness but it can make life a lot easier’ 05:30
Sprout pivots in pandemic towards takeaway and supplying food retailers 05:14

1 Pilita Clark: The looming legal minefield of working from home
2 State should use Covid-19 impact on construction costs to build new homes
3 Motor tax hikes, D’arcy quits politics for IAIM, and Sprout’s takeaway pivot
4 Sprout pivots in pandemic towards takeaway and supplying food retailers
5 New car prices could rise by up to €10,000 if taxes increase in budget
6 More financial firms setting up or expanding in Ireland despite Covid-19
7 Me & My Money: ‘Money can’t buy you happiness but it can make life a lot easier’
8 Former junior finance minister to head funds sector lobby group
9 Should I switch bank now with Ulster Bank at risk of closing?
10 Air travel never going ‘back to way it was’
Real news has value SUBSCRIBE