‘Work to do’ on new broadcasting charge, Minister says

Details to be decided, but not fair to call it a ‘household charge’ – Richard Bruton 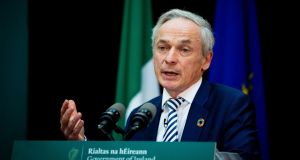 Minister for Communications Richard Bruton said: ‘People should not be able to exempt themselves from the proposed charge by arguing they do not consume any RTÉ or TG4 services.’ Photograph: Tom Honan

The Government has “work to do” before it can say who will be eligible to pay a mooted replacement for the television licence fee and how it will be enforced, according to Minister for Communications Richard Bruton.

He said it was “clearly a challenge” to design a new broadcasting charge and that it would “take time” to gain public acceptance for a charge that was not linked to ownership of a traditional television set.

His remarks come as RTÉ warned that the plan could make its finances “more difficult” in the shorter term, while the Irish Congress of Trade Unions (ICTU) said it did not address RTÉ’s immediate funding crisis and that it would seek a meeting with the Minister to clarify his proposals.

Mr Bruton said the current licence fee was “outdated”, but because of the complexity involved, it was not possible to introduce a “robust” modern charge until at least 2025. He could not say if every owner of a smartphone would be obliged to pay it.

“We don’t want to lock into a definition of device that will be outmoded by technology changes very quickly.”

The Minister added that he believed the charge could “be made workable”, but that the Government had to be careful that “it doesn’t become a leaky ship”.

It would not be fair to call the proposal a household charge “until we work out the basis” for it, he said.

The Minister also indicated the new charge would initially be the same as the existing licence fee, which has been fixed at €160 since 2008. There was no plan to change the existing system of exemptions for pensioners, he said.

A decision to put licence fee collection out to tender later this year was “an important interim step” for media funding, the Minister said.

He had “no doubt” that An Post would be among the companies to tender for the business. It is currently responsible for it, resulting in an evasion rate of 12.8 per cent last year, which was high by international standards.

Under the proposed five-year contract, it would be “worth their while” to put in place an improved database and enforcement methodology, Mr Bruton said.

“To be fair, An Post have never had a five-year contract.”

RTÉ said the deferral of licence fee reform meant the crisis in the funding of public service media would continue. “With reform now pushed out further, RTÉ’s capacity to deliver against its existing remit is severely compromised.”

The public service broadcaster, which has recorded losses in seven of the last 10 years, received 86 per cent of the €221 million in licence fee receipts collected last year. The balance went to TG4, collection costs and the Broadcasting Authority of Ireland’s Sound & Vision scheme.

The scheme, which is accessed by independent producers, is awarded 7 per cent of licence fee receipts, but the Government is now exploring further such “top-slicing” of the fee. RTÉ’s minimum spending requirement on independent productions may also be increased as a stimulus to the independent sector.

Asked if this would go hand in hand with significant job losses within RTÉ, which employs about 1,800 people, the Minister said that was not a question for him.

“The issue of RTÉ’s design of a future vision for itself is not one that I am the author of. They have an independent board and an independent regulator, so I am not going to be telling them what to do.”

The Government intends that some of the money raised through more efficient licence fee collection will allow for a reduced levy on broadcasters for the cost of regulating the sector. This measure was first promised in early 2017.

But RTÉ would still be able to benefit from any reduction in evasion, the Minister said. People should not be able to exempt themselves from the proposed charge by arguing they do not consume any RTÉ or TG4 services, he added.

“People are free, of course, not to watch it, or not to use it, but I think there is a universal obligation. This is part of a public service. As the ad [for licence fee compliance] says, it is part of living in Ireland. ”