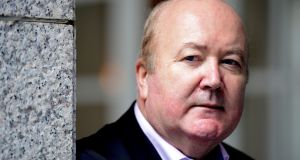 Former “Irish Times” editor Conor Brady: “How do we pay for good journalism as distinct from ‘infotainment’ and recycled celebrity news?” he asked the ongoing Women in Media conference in Ballybunion. Photograph: Cyril Byrne/The Irish Times

The challenges facing women in leadership roles in the media today are “immense”, according to former Irish Times editor Conor Brady.

“How do we train, equip, and protect media personnel who are reporting from conflict zones, rather than leaving it to freelance kids with iPhones trying to get a toehold for themselves in their careers?” he asked.

Funding structures and models have broken down, he said.

“It’s not clear what they will be replaced with. It was interesting and disquieting to hear Noel Curran, the outgoing director general at RTÉ, acknowledge that the licence fee is no longer fit for purpose.

“So how do we fund newsrooms? How do we pay for good journalism as distinct from ‘infotainment’ and recycled celebrity news?”

Garda Commissioner Nóirín O’Sullivan, who was called away from the conference to a meeting, left a note to be read to those gathered which called attention to the 20th anniversary of the killing of journalist Veronica Guerin.

Minister for Justice Frances Fitzgerald was set to attend, but ongoing talks on the formation of a new government have kept her in Dublin.

In some ways, Ballybunion is an unlikely setting for a conference of big media and political players, but a statue of Bill Clinton swinging a golf club at the top of the town denotes that the place is adept at hosting powerful people.

At 2pm, The Irish Times Women’s Podcast is hosting a live podcast recording chaired by Dr Aoibhinn Ní Shúilleabháin titled “The Producers”. It will examine the professional lives of producers across film, television drama and current affairs programming. The panel will include Katie Holly of Blinder Films; Aoife Stokes, producer of RTÉ’s Claire Byrne Show; and Catherine Magee who produced Rebellion and Charlie.

On Sunday, the topic of sports journalism as a catalyst for change will be explored by Anne McCarthy of Sport Ireland; former Irish women’s rugby captain Fiona Coughlan; Emily Glen of the Fair Game podcast; deputy head of RTÉ Television Sport Cliona O’Leary; and manager of the Irish women’s soccer team, Sue Ronan.

The conference will close on Sunday afternoon with a speech from former tánaiste Mary Harney.