IT staff’s lack of knowledge on alleged INM breach ‘extraordinary’ 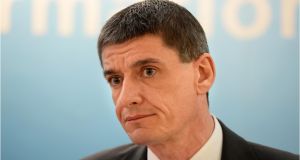 The State’s corporate enforcer has said it was “extraordinary” that Independent News & Media’s two most senior IT staff had “such a lack of knowledge” about a suspected data breach in 2014, court documents show.

Director of Corporate Enforcement Ian Drennan expressed serious concern that the company’s IT director Gerry Wilde and deputy IT director Ronan McCarthy did not know “the specifics” about the removal of INM’s back-up tapes of computer data, directed by the company’s then chairman Leslie Buckley, and their subsequent interrogation by third-party companies outside the jurisdiction over several months.

Mr Drennan raised his concerns in legal papers submitted to the High Court as part of his bid to have High Court inspectors investigate further after he raised serious concerns about the alleged data security breach, corporate governance issues and INM’s protection of journalistic sources following a year-long investigation.

His lengthy affidavit to the court discloses that in May 2015, INM’s then chief executive Robert Pitt was told about the data incident by Mr Wilde. He was “so concerned” about the matter that he asked Mr Pitt if they could discuss it on the street outside INM’s offices on Talbot Street in Dublin, which they did during a 10-minute walk.

Mr Pitt later disclosed the alleged breach to the Office of the Director of Corporate Enforcement (ODCE) in a protected whistleblower disclosure in August 2017.

Mr Pitt claims Mr Wilde told him he was instructed by Mr Buckley to provide access to INM’s IT systems, including the emails of former directors, to a company called TDS UK and Derek Mizak, an IT consultant whom Mr Buckley had recommended previously to Mr Pitt in relation to concerns about leaks in INM.

Mr Drennan names a total of six individuals and six companies outside INM that had access to the data.

In his court filing, he states that he found it “troubling” that INM’s data would have been accessed “without INM itself being clear as to the identities and roles of all those involved in the process”.

The affidavit states Mr Wilde told the ODCE he had no knowledge of a contract with TDS UK and that he was away on annual leave when a person from TDS UK came into INM with Mr Mizak “to perform services”.

Mr McCarthy was also unable to provide details about what exactly TDS UK did. He told the ODCE that he assumed its work with Mr Mizak “flowed” from an earlier internal IT searching exercise performed by him with then company secretary Michael Doorly, now INM chief executive, “to do with a legal contract” and was a “deep dive into the system to try and see was there anything else there”.

Mr Wilde and Mr Doorly are among nine current and former INM directors and executives to have filed affidavits this week in response to Mr Drennan’s claims.

1 In six months we will be in the grip of a 1980s-style recession
2 Angela Merkel sweeps in to save the euro zone
3 Property price drop of up to 12% this year a ‘reasonable’ assumption – McDonagh
4 Avoca wins battle with Monkstown locals over cafe operation
5 Donohoe warns of cost of pandemic as budget deficit swells to €6.1 billion in May
6 Chartered Land moves closer to approval for Dublin’s tallest tower
7 Aer Lingus wants quarantine period axed to resume flights in July
8 Should my mam wait for house prices to drop before buying?
9 Brother is dragging his heels as executor of uncle’s will - is there anything I can do?
10 The fight over how to pay for the global economic recovery has begun
Real news has value SUBSCRIBE