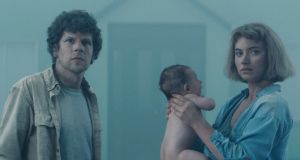 Science fiction thriller Vivarium will open the Virgin Media Dublin International Film Festival (VMDIFF) next month in the broadband and television company’s second year as sponsor of the event.

The Irish-backed film, directed by Lorcan Finnegan and co-produced by Dublin’s Fantastic Films, will be the first film shown at the festival on February 26th, a month ahead of its general Irish release.

A second Virgin Media Gala, for DMC Film and Element Pictures’ Calm With Horses, will take place midway through the festival. The full programme will be launched today and will do more than in previous years to help ticket-buyers find films by genre and other preferences, Virgin said.

“We’re happy with our partnership with the festival. I think we learned a lot about each other last year,” said Paul Farrell, vice-president of commercial at Virgin Media Ireland, which is owned by cable giant Liberty Global.

“The second year is the one where you should really feel it coming together.”

Virgin Media’s three-year deal to back the annual festival, which counts Jameson and Audi as its previous sponsors, was struck to help it build its reputation within in the Irish creative industry. The company owns Virgin Media Television, the broadcaster previously known as TV3 Group, which has become a more active funder of drama in recent years.

“The festival does a lot for us as a brand, but in a subtle way,” Mr Farrell said. “It’s in our interest to promote and support local content.”

Cluster Fox Films’ Innocent Boy, the winner of the Virgin Media Discovers short film competition, will be the subject of a screening and panel discussion at the festival. Virgin Media Television will also broadcast the film, as well as four shorts by film students and Box Office, the cinema review and interview show presented by Lisa Cannon.