UTV Ireland made loss of €19.5m in first year 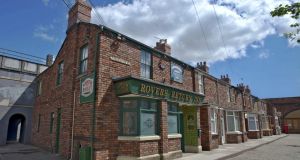 ‘Coronation Street’ pub Rovers Return: the soap opera is currently being shown on the UTV Ireland channel but may transfer to TV3.

UTV Ireland made a net loss of €19.5 million in 2015, its first year on air, accounts filed to the Companies Office confirm.

The channel recorded €16 million in revenue, but the expense of running the business arrived at €35 million. The company had previously recorded operating expenses of €3.8 million in 2014 as it set up a studio and base in Dublin’s docklands and prepared for its launch.

The business, which is in the process of being sold by ITV plc to Virgin Media, had net current liabilities of €29.4 million as of the end of 2015.

The directors’ report of what went wrong for the channel echoes their previous statements, citing “consumer confusion” around the retuning of Saorview receivers and “programming inconsistencies with the long-established UTV Northern Ireland”.

The report accompanying the accounts says these issues were both “gradually addressed”, but that the “absence of consistently popular programming” in key weekend slots meant its audiences, and consequently its advertising revenue, were lower than projected.

This led its original owner, UTV Media, to issue a string of profit warnings throughout 2015. UTV Media sold the two UTV channels to ITV, in a deal completed in February 2016.

The Belfast-based UTV Media company effectively no longer exists, having changed its name to Wireless Group and sold its remaining assets to Rupert Murdoch’s News Corp.

In July, it was announced that ITV would be selling on the Dublin-based UTV Ireland to TV3 owner Virgin Media.

This deal has been cleared by the Competition and Consumer Protection Commission and is now awaiting approval by Minister for Communications Denis Naughten.

Virgin Media and TV3 are keen for the deal to be completed before the end of the year so they can plan ahead for 2017 in their conversations with the media agencies who book television advertising campaigns.

UTV Ireland shows the popular soaps Coronation Street and Emmerdale and when these and other programme rights transfer to Virgin Media as part of the deal with ITV it may decide to switch them back to the TV3 schedule.

Job losses have not been ruled out. UTV Ireland employed an average of 107 people during 2015, with 36 of this number involved in programming, although the total number is understood to have reduced since then.

Before the end of its first year on air, it had parted company with its high-profile signing Pat Kenny, while news co-anchor Chris Donoghue also left in order to concentrate on his presenting role at Newstalk.

One home-produced hit commissioned by UTV Ireland, Daniel and Majella’s B&B Road Trip, made by Vision Independent Productions, has since moved to RTÉ One.

The company that looks set to be UTV’s strictly temporary parent, ITV, has been battered by a more cautious advertising market in the wake of Britain’s vote to leave the European Union, and on Thursday it forecast that fourth-quarter revenue from advertising would drop 7 per cent.

1 Majority of employees don’t want to return to pre-Covid working patterns
2 ‘I set up an investment club many years ago with a bunch of friends’
3 If tourists are such pariahs should we not be testing them on arrival?
4 Norwegian airline sued in Dublin by inflight caterer
5 Cigarette sales, Leo to meet the banks, and Arclight’s €20m payout
6 Homeworking is depriving me of juicy gossip
7 Investors in Irish solar energy fund in line for €20m payout
8 ‘My rent here is so low it’s a joke’
9 Tobacco giant’s menthol-ban substitutes take 5% share of Irish market
10 Varadkar and Donohoe to meet banks to discuss mortgage breaks
Real news has value SUBSCRIBE