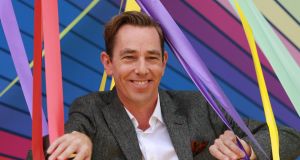 The pay bill for the 10 highest paid presenters at RTÉ rose to €3.2 million in 2019, up from just above €3 million in 2016, according to figures published by the State-owned broadcaster on Wednesday afternoon.

RTÉ said total fees and salaries paid to the top 10 was subsequently reduced by 15 per cent for 2020 in line with an agreement it made with the Government in late 2019. The top 10 pay bill represents less than 1 per cent of its total operating costs, it added.

The Late Late Show’s Ryan Tubridy remained the highest-paid presenter at RTÉ with his 2019 pay packet staying at €495,000 ahead of the scheduled renegotiation of his contract in 2020. The second highest-paid was once again Ray D’Arcy, who was paid €450,000, the same sum he received in the previous three years.

RTÉ’s last publication of top presenter fees and salaries, in December 2018, related to 2016. On Wednesday, it published lists for the years 2017, 2018 and 2019. It is understood that Mr Tubridy and Mr D’Arcy are among those to have taken a pay cut since.

The earlier lists show that sports commentator George Hamilton and presenter Darragh Maloney were eighth and ninth on the list in 2017, but Mr Hamilton had dropped to 10th by 2018 and neither made an appearance in 2019 as the pay threshold to make the top 10 had risen.

There were no new entries on the 2019 list, although Ms Wilson returned to tenth position, having last been that high in 2016. Her salary has nudged up over the past four years, meaning she has overtaken Mr Hamilton and Mr Maloney.

Mr O’Rourke, Mr Dobson and Ms Wilson are all employees of RTÉ, while the rest of the 2019 top ten are contractors who are paid for their services through their companies.

RTÉ last week published its annual report for 2019 showing that it recorded a net deficit of €7.2 million, its eighth annual deficit in the past 11 years. It ended the year with the Government pledging to give it more financial support on the condition that it undertake to cut €60 million from its cost base over three years. However, it has yet to win political support for a more fundamental reform of its funding model.

RTÉ director-general Dee Forbes, whose remuneration including a car allowance and pension payments was €338,000 in 2019, said the presenters made a “significant contribution” to Irish media.

“Our presenters have been crucial to RTÉ’s output throughout this pandemic, as audiences turned to their national public media in record numbers for vital news, information, entertainment and companionship,” Ms Forbes said.

“They continue to make a significant contribution to public media in Ireland and enable RTÉ to optimise important commercial revenue, which is essential to support our public services.”

The director-general said RTÉ was “on course” to deliver the savings it agreed to make. “In that context, we continue to keep the fees of our highest-paid presenters under constant review.”

The level of top presenter pay has been controversial within RTÉ itself. In late 2019, the RTÉ sub-branch of the overall Dublin broadcasting branch of the National Union of Journalists passed a motion urging RTÉ management to move immediately to reduce payments to top presenters.

The motion said no one in the organisation should be earning more than €208,000, the salary of senior secretaries general in the civil service.