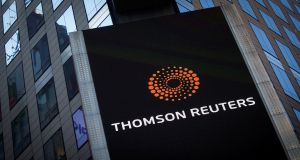 Thomson Reuters has cut costs and shed some businesses due to the fallout of the financial crisis in 2008.

Smith, a former journalist who oversaw a period of major change at the company, will stay on for a transition period through 2020 and become chairman of the Thomson Reuters Foundation.

Stephane Bello, chief financial officer, will also step down from his role and will be succeeded by Mike Eastwood, current senior vice-president of corporate finance. Bello will oversee strategy and business development into 2021, the company said.

In recent years, Thomson Reuters had cut costs and shed some businesses as it recovered from the fallout of the financial crisis in 2008.

Smith’s defining accomplishment was the sale he engineered of a 55 per cent stake in the company’s financial division in 2018 to Blackstone Group, valuing the business at $20 billion.

Shares of Thomson Reuters have more than doubled since the Refinitiv deal, and have tripled since he took over as chief executive in 2012.