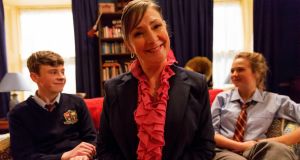 Drop Dead Weird: the RTÉjr drama has received funding from Sound and Vision for its third series. Photograph: Keaton Stewart

The producers of Swedish-Irish thriller series North Sea Connection have received the highest award in the latest funding round from the Broadcasting Authority of Ireland (BAI) Sound and Vision scheme.

A sum of €500,000 was awarded to the six-part drama from Swedish media group Mopar and Irish production company Subotica, with the two companies having previously worked together on the multilingual Rig 45. An Irish broadcaster has not yet been confirmed to air the co-production.

A total of €7 million was allocated to 126 radio and television projects, with €6.4 million of this going to television. There were a total of 229 applications seeking funding of almost €20 million.

Animo TV Productions was awarded €480,000 for the entertainment show Eating with the Enemy for Virgin Media One, while Mind the Gap Films received €385,000 to make Ireland’s Unidentified, a documentary series about Irish forensic scientists, for the same broadcaster.

Most of the other large awards were for children’s TV series. Pictor Productions was awarded €400,000 to make the animation series Flix for RTÉjr, while Telegael Teo will receive the same sum for Drop Dead Weird 3, an RTÉjr children’s drama.

“Once again, the level of funding sought in this round of Sound and Vision significantly exceeded the money available. Given the quality, variety and diversity of the projects proposed, assessors were faced with difficult choices,” said BAI chief executive Michael O’Keeffe.

The BAI confirmed that €2.5 million from Sound and Vision, which is paid for through 7 per cent of licence fee funds, would be ringfenced for the independent commercial radio sector.

Minister for Communications Richard Bruton last week announced the move, which is designed to help the sector survive the Covid-19 crisis, which has triggered a collapse in advertising revenues.

Details of this special funding round and other supports for broadcasting will be announced next week.