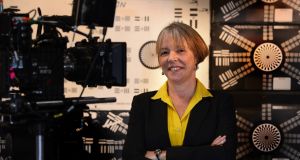 Ardmore Studios chief Siún Ní Raghallaigh: Along with Screen Producers Ireland chief executive Barbara Galvin, she has been outspoken about the need to expand facilities for the film industry in Ireland. Photograph:Cyril Byrne

Some of the most storied characters of Irish and international stage and screen have passed through the gates of Ardmore Studios.

And that’s not just the actors and directors. The current majority owners of the Bray studios – Ossie Kilkenny and Paul McGuinness – are celebrities in their own right, synonymous with the U2 backroom where they first met each other, even if neither is still associated with the band.

Their increasingly fractured relationship has been as dramatic as any of the productions forged on 18-acre plot over its 58 years of existence. The recent decision by Kilkenny and Ardmore chief executive Siún Ní Raghallaigh to open a new studio in Dell’s abandoned Co Limerick facility appears to have been the catalyst for the final sundering of their partnership.

McGuinness is understood to have baulked at the idea of Troy Studios, run by an Ardmore shareholder and chief executive, operating in direct competition with a business that has all too often struggled with the vagaries of the economics of film-making.

But Ní Raghallaigh, in particular, has been vocal on the need to expand studio facilities in the State. And she is not alone. Screen Producers Ireland chief executive Barbara Galvin said earlier this year that a shortage of studio space had been hampering development of the industry and the capacity to attract big budget productions.

But Ardmore’s full service offering means it is still a strong player and M&A sources suggest it could fetch between €15 million and €20 million.

The much larger Pinewood Studios in London, which was sold recently in a £323.3 million deal, said in its most recent accounts that it was operating at 81 per cent capacity and “as a result, the company has not been able to accommodate several film or television productions”.

It seems to be a seller’s market.