‘Resistance’ and ‘Taken Down’ on broadcaster’s slate, alongside four BBC titles 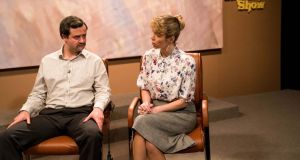 Actors Daniel Mays and Anna Maxwell Martin portray Colin and Wendy Parry in the BBC’s fact-based drama ‘Mother’s Day’, which will air on RTÉ One on September 2nd. Photograph: BBC

RTÉ is seeking a sponsorship fee of €400,000 for a slate of “premium” dramas that it will show between this September and autumn 2019, including two series, Taken Down and Resistance, that it commissioned itself.

The first titles included in the offer are two fact-based dramas that were commissioned by the BBC and filmed in Belfast.

Mother’s Day, a one-off BBC Two drama about the aftermath of the IRA bomb in Warrington in 1993, will be shown on RTÉ One on September 2nd, according to the sponsorship document.

Written by Nick Leather, it features Vicky McClure as Susan McHugh, the Dublin woman who organised peace rallies in its wake, alongside Anna Maxwell Martin and Daniel Mays as Wendy and Colin Parry, who lost their son in the attack.

Doing Money, by Gwyneth Hughes, is a one-off BBC Two drama about a young Romanian woman (Irish actor Karen Hassan) who is trafficked from London to Ireland and used as a sex slave. RTÉ One will show it on October 21st.

In November, it will air Death and Nightingales, a three-part adaptation of the Eugene McCabe novel set in Co Fermanagh that was also commissioned by the BBC.

Starring Irish actors Ann Skelly and Jamie Dornan alongside Welsh star Matthew Rhys, Death and Nightingales has been adapted and directed by The Fall writer Allan Cubitt and co-produced for the BBC by Dublin-based company Soho Moon.

Taken Down, a crime series from the makers of Love/Hate and novelist Jo Spain, will begin on November 4th, potential sponsors have been advised.

The RTÉ-commissioned, six-part drama focuses on the investigation into the death of a young Nigerian migrant, taking viewers into “a twilight world of the new Ireland where slum landlords and criminals prey on the vulnerable”.

It was shot in Dublin this summer with a cast including Lynn Rafferty, Aïssa Maïga and Brian Gleeson.

Resistance, the follow-up to the 1916-themed Rebellion from writer Colin Teevan, will be RTÉ One’s big drama for the new year, beginning January 6th. It also stars Brian Gleeson.

The five-part series dramatises the build-up and fallout from the events of Bloody Sunday in 1920, depicting “a world of shadows and echoes, double-agents and unreliable narrators at a time of high tension, fear and anxiety”. It has been made for RTÉ by Zodiak Media Ireland, a subsidiary of French television giant Banijay Group.

The Dublin Murders, a BBC-commissioned adaptation by Sarah Phelps from two Tana French novels In the Woods and The Likeness, is also included in the sponsorship offer. This eight-part series, which is co-produced by Irish company Element Pictures and shot in Dublin and Belfast, will not air until autumn 2019.

Sponsorship stings will also be added to the six 20-minute dramas commissioned through Storyland, a pitching scheme aimed at emerging talent. These shorts, which will be available to view on an upgraded new version of the RTÉ Player, all revolve around the theme of rage.

RTÉ director-general Dee Forbes will launch the broadcaster’s new season of programming on Thursday at Studio 4 (the Late Late Show studio) on its Montrose campus.

The broadcaster recently appointed Shane Murphy, previously the managing director of London-based Acorn Media Enterprises, as its group head of drama and comedy, after a lengthy public competition.

Mr Murphy’s international experience is understood to have been the key factor in his appointment, as RTÉ is increasingly seeking to enter co-production arrangements on drama and scripted comedy rather than shoulder the costs and risks alone.