Station received 203 formal complaints in relation to the graphic

RTÉ's Late Late Show has been criticised for displaying a map of Ireland with the six counties of Northern Ireland greyed out during a segment with Dr Eva Orsmond on cancer figures. Video: RTÉ 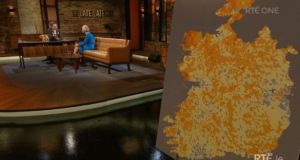 The map of Ireland used to illustrate a piece in which Dr Eva Orsmond spoke about the greater risk of cancer for people who live in deprived areas of the country. Image: Screengrab from RTÉ Player

The executive producer of RTÉ’s Late Late Show has apologised to viewers for using a map of Ireland that excluded Northern Ireland during a segment of the Friday night programme.

The station received 203 formal complaints in relation to the graphic, which was used on the September 1st programme during an item concerned with cancer risks for people living in deprived areas of the Republic.

Sinn Féin MP for West Tyrone, Barry McElduff, was one of those who received a letter from producer John McMahon, following the making of a complaint.

“I truly am sorry that you were unhappy with the presentation of the item on social inequality in Ireland which featured Dr Eva Orsmond and particularly that the data map we used was the cause of upset to viewers,” Mr McMahon said.

He said the map was a data map and not a geographical or political one, and that it was provided by a third party that had carried out the relevant research based on data collected during the census in the Republic.

“As such it did not contain any data relating to the six counties and therefore that section of the map was blank.”

He said the graphic was important as it showed the areas across the 26 counties where social inequality and deprivation were having a serious impact on the life, and life expectancy, of communities.

“That said I fully accept that as presented, the map appeared to many as a geographical map and as such appeared disrespectful and distressing to you and other viewers.

“All I can do is assure you that it was not an intentional slight on our audience north of the border and I apologise for the upset caused to viewers both there and in the Republic.”

Mr McElduff said he felt the use of the image without the six counties was disrespectful and offensive to viewers north of the border.

The SDLP’s Mark Durkan similarly complained about offence caused to RTÉ’s audience in the North.

RTÉ operates a system whereby complaints about programmes are initially responded to by the executive producer. If the complainant is not satisfied with the response received, he or she can then complain to the Broadcasting Authority of Ireland. RTÉ, as a corporate body, responds at that stage.