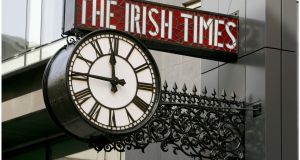 The group behind The Irish Times made an operating profit of €3.82 million before exceptional items in 2019, up 46 per cent compared to the €2.61 million recorded the previous year.

The news publisher’s turnover increased 17 per cent to €110.1 million, up from €94.4 million, the latest accounts for The Irish Times DAC show.

The figures for 2019 reflect the first full year of trading from the Irish Examiner and other publishing and radio assets acquired from Landmark Media Investments halfway through 2018.

Liam Kavanagh, the group’s managing director, said The Irish Times title itself had recorded its fourth consecutive year of rising consumer revenues in 2019, with growth of 6 per cent driven by an increase in paid subscribers.

“In the context of the industry we are in, the changes we are making put us in a good position,” Mr Kavanagh said.

Continued dependency on shrinking print revenues means that this transition to digital is still “a work-in-progress”, he added. “Our objective is to become less dependent on print revenues and more on paid digital content.”

Print advertising revenues continued their long-term decline last year; however, there was no compensating uplift in digital advertising revenues, which “flatlined”. Mr Kavanagh said this was “disappointing” and more work would be done to grow them again.

The Covid-19 pandemic has contributed to significant “step up” in habitual traffic to the Irish Times website and app throughout 2020, with coverage of the ongoing crisis prompting readers to take out paid subscriptions at three times the rate of sign-ups seen in 2019.

This subscriber growth, together with strong print sales of the Irish Times weekend edition, has cushioned the impact of a plunge in advertising revenues across the market as advertisers slashed their second-quarter budgets.

Cost savings, use of the Government’s wage subsidy scheme and revenue from public health campaigns have also helped alleviate the worst effects of the pandemic.

“There was real concern in March about how we would get through it,” said Mr Kavanagh. “We were in an unusual position as a business as we couldn’t close our doors in response to what was happening. We were a news publisher faced with the biggest news story we would ever see and we had to continue to operate.”

While the business challenge posed by Covid-19 is “not over”, the year has been “much more stable” financially for the group than it expected it would be in March.

Mr Kavanagh said the group will continue to review costs, describing this as “a fact of life in the news publishing industry”, but it will also invest in areas such as technology to help it serve its expanding direct customer base and develop its digital properties.

A paid content model will be introduced for the recently relaunched IrishExaminer.com website, while investment will also be made in Cork daily the Echo and the six weekly regional titles that became part of the group in 2018.

Mr Kavanagh said the acquired businesses, which also include majority stakes in radio stations WLR and Beat 102-103 and a minority stake in Cork’s Red FM, had “consolidated in the group very well” since July 2018.

“They are all profitable and doing well,” he said.

The average number of people employed throughout the year was 818, up from 630, with the rise reflecting the full year of ownership of the former Landmark businesses. Other subsidiaries include property business MyHome.ie, training company Itronics and web publisher DigitalworX, while the group also owns a 50 per cent interest in magazine publisher Gloss Publications.