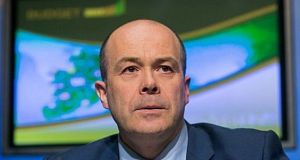 Minister for Communications Denis Naughton: “I have not seen the alleged contents of the affidavit that you refer to and, as this matter is before the courts, I cannot comment.” Photograph: Collins

Plans by Minister for Communications Denis Naughten to refer the proposed takeover of Celtic Media by Independent News & Media (INM) to the Broadcasting Authority of Ireland (BAI) were relayed to Denis O’Brien two months before they were made public, according to court documents.

Mr Naughten’s intentions, outlined on a private call with a PR executive acting for INM, were among information shared in nine communications that the State’s corporate watchdog has claimed may amount to “inside information” and potentially a breach of stock market rules by the company’s former chairman Leslie Buckley.

Director of Corporate Enforcement Ian Drennan made his claims as part of his application to have inspectors appointed to investigate the company, which is being opposed.

He argued in an affidavit filed after a year-long investigation into the firm that Mr Buckley shared information with Mr O’Brien in eight emails and one text from March 2016 to January 2017. This was done “in advance of that information being available to INM’s other shareholders”, potentially breaching Market Abuse Regulations.

On November 12th, 2016, Mr Buckley sent Mr O’Brien an email he received from PR executive Nigel Heneghan with details of a conversation the Minister had with Eoghan Ó Neachtain, director of public affairs at Mr Heneghan’s firm, about the company’s proposed takeover of Celtic Media Group, a regional newspaper group.

Mr Heneghan told the then chairman that the Minister told Mr Ó Neachtain, a former government press secretary, the previous afternoon during a telephone call that, based on advice from his officials, he planned to refer the takeover to the BAI “because of the overall ownership of print and broadcast titles by DOB [Denis O’Brien].”

I have not seen the alleged contents of the affidavit that you refer to and, as this matter is before the courts, I cannot comment

Mr Heneghan told Mr Buckley the Minister’s decision was “to be treated as highly confidential”.

Mr Naughten did not formally refer the later abandoned merger to the BAI until January 2017.

In response to questions, the Minister said: “I have not seen the alleged contents of the affidavit that you refer to and, as this matter is before the courts, I cannot comment.”

Mr Ó Neachtain told The Irish Times that Mr Naughten would have known he was working for INM. He said he was asked by the company to find out the Minister’s view of the suggested merger after the Competition and Consumer Protection Commission’s decision.

“I ascertained what his reaction would be and I told the client. What they did with it [the information] after that is a matter for them,” he said.

1 Can we finally say farewell to the scourge of hot-desking?
2 Mortgage arrears: Prevention is definitely better than cure
3 Irish pharma sector warns of protectionism as US corners supply
4 Why gift a son now if it eats into his tax-free inheritance threshold?
5 Flights abroad ban could last all summer
6 Limerick-born entrepreneur gets FDA approval for respiratory monitor
7 Uber agrees to acquire US food delivery group in in $2.65bn deal
8 Irish firm teams up with Salt Edge to simplify mortgage process
9 Warning over medical supplies, FDA approval and hot desk hell
10 Brexit: System agreed for Irish goods to skip checks on UK trade
Real news has value SUBSCRIBE