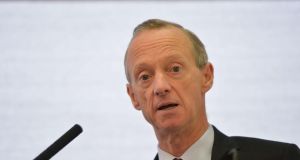 NewsBrands Ireland chairman Vincent Crowley said: “We live in a changing world and it was time that our identity reflected the new reality of newspaper publishing and news delivery.” Photograph: Alan Betson/The Irish Times

The group that represents the Irish newspaper industry, the National Newspapers of Ireland (NNI), is rebranding as NewsBrands Ireland. The organisation said the change was designed to reflected increasing demand for online news content and that many of the publishers who belong to the group give their print and online products equal prominence.

“We live in a changing world and it was time that our identity reflected the new reality of newspaper publishing and news delivery,” NewsBrands Ireland chairman Vincent Crowley said at an event to mark the relaunch in Dublin. “We are no longer newspaper publishers in the traditional sense but owners of news media brands, both print and online.”

A review of how the industry measures readership, currently conducted through the JNRS survey, is underway, said the organisation’s co-ordinating director Dara McMahon. She joined the NNI from Ulster Bank last year and is overseeing its relaunch.

Mr Crowley, a former Independent News & Media chief executive, said that for a lot of people, “newspaper” still meant a printed title. “But . . . for a new generation of readers we exist mainly in the digital sphere.”

Big Tech fines delayed, ESB called out and don’t believe the Facebook blitz 06:41
Maxim Integrated to spend €23m on new design centre at Irish base 06:20
AI is no more the end of the road for labour than the plough was 06:20
New State body lent €114m to build 600 homes in first full year 06:15
Pulling up of UK’s drawbridge to low-skilled workers may aid Irish construction 06:13
Search executive
jobs on irishtimes.com