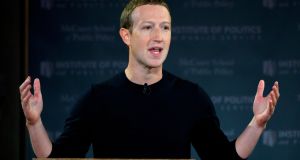 Mark Zuckerberg on Thursday gave a full-throated defence of Facebook as a champion of free expression, aiming to put the social network above politics as impeachment proceedings over US president Donald Trump and the 2020 presidential election have increasingly made his company a target.

In a winding, 35-minute speech at Georgetown University’s Gaston Hall in Washington DC – where presidents and foreign heads of state have delivered addresses – the Facebook chief executive said the social network had been founded to give people a voice and bring them together and that critics who had assailed the company for doing so were setting a dangerous example.

Invoking Frederick Douglass, Martin Luther King Jr, the Vietnam War and the First Amendment, Mr Zuckerberg said he saw this moment as one in which Facebook wanted to be on the proper side of history by espousing the western ideal of free speech and democracy – rather than buckle to a politically charged environment, even if it meant being unpopular. He contrasted Facebook’s position with that of China, where Beijing controls and censors speech.

“People having the power to express themselves at scale is a new kind of force in the world – a Fifth Estate alongside the other power structures of society,” Mr Zuckerberg said. He added that despite the messiness of free speech, “the long journey towards greater progress requires confronting ideas that challenge us. I’m here today because I believe we must continue to stand for free expression.”

The address by the tech billionaire was an unusually public doubling down on free expression online as debate over that stance has ramped up. Mr Zuckerberg used the moment to square off against his critics and to try to place Facebook in the longer arc of history, after years of being under fire for disinformation, violent and hateful content that has proliferated on the site.

In doing so, he also positioned Facebook as an American internet company that wants to spread American values, unlike those in China where the internet is largely controlled by the government. And he reinforced the line against what Facebook would not do: become an arbiter of what goes and what doesn’t online.

Mr Zuckerberg made his stand as Facebook has grappled with a firestorm over political speech in recent weeks. Last month, the company unveiled a sweeping policy in which it said it would not moderate politicians’ speech or fact check their political adverts because comments by political leaders, even if false, were newsworthy and in the public’s interest to hear and debate.

That quickly drew criticism. Senator Elizabeth Warren, a leading Democratic presidential candidate, accused Facebook of being a “disinformation-for-profit machine”. Marc Benioff, chief executive of software company Salesforce, said the social network “needs to be held accountable for propaganda on its platform.” And civil rights groups censured the company for allowing lies and falsehoods to appear on its site. – New York Times Service