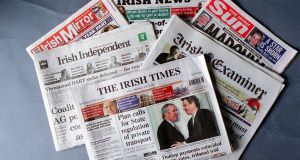 The Irish Times has reported a strong rise in the number of customers paying for content last year.

New figures from the Audit Bureau of Circulations (ABC) show an average of 79,427 copies of The Irish Times were sold in print or in the ePaper version of the newspaper on average every day in the second half of 2016. This marks a 2.6 per cent decline on the 81,886 copies sold for the same period a year earlier.

An average of 91,666 customers a day now pay for The Irish Times in print, ePaper, digital or combination. This includes customers who purchase digital-only subscriptions which are not included in the ABC measurement.

The total direct customer base for The Irish Times has risen threefold to 55,724 since the launch of subscription services with a 15 per cent increase in the average number of paying customers per day.

“We are delighted that our overall paying customer base has grown substantially since launching the digital subscription service just under two years ago,” said The Irish Times managing director Liam Kavanagh. “While there is some shift from print to digital sales, our overall ABC figure has been maintained. We have added new customers almost every day since launch.”

According to the latest ABC figures, Irish newspaper sales continued to decline overall in the second half of 2016. The circulation of daily print titles (including UK titles sold in Ireland) was 8.4 per cent lower year-on-year and down 6 per cent on the first half of the year. The Sunday print market also retreated 8.4 per cent on an annual basis.

The Irish Independent saw combined sales fall by 9.6 per cent during the second half of last year. On average 99,045 copies were sold per day across print and digital, down from 109,678 a year earlier. Its sister paper, the Herald, saw sales slide 7.8 per cent year-on-year to 40,847.

The Irish Examiner recorded a 7.8 per cent year-on-year decline in print circulation to 30,090 in the July to December period from 32,648. Sales of Cork’s Evening Echo, which like the Irish Examiner is owned by Landmark Media Investments, fell 11 per cent to 10,270 from 11,534 for the same six-month period in 2015.

In the Sunday newspaper market, sales of so-called “quality” titles declined 7.3 per cent versus the latter half of 2015.

The biggest seller remained the Sunday Independent, which saw sales dip just over 20,000 from a year previously to fall below the 200,000 mark. Circulation was down 3.8 per cent versus the first six months of the year.

The Sunday Business Post saw circulation dip by just under 6 per cent to 30,244 while sales of the Sunday Times slipping 1.7 per cent to 78,658, year-on-year.

The UK edition of the Daily Star Sunday and The Sun’s Sunday edition both recorded minor gains in circulation to 15,775 and 56,066 respectively.