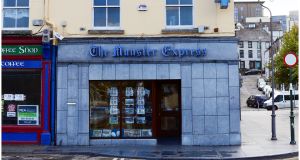 Iconic Newspapers, the publishing group that owns about 20 Irish regional newspapers including the Limerick Leader, is in advanced talks to buy the Munster Express weekly paper in Waterford.

It is understood that the Walsh family, who own the paper, has been in talks about a sale to Iconic, run by British businessman Malcolm Denmark. Several sources say both sides appear to be close to an agreement.

The deal would be the latest Irish expansion move in the troubled regional newspaper sector by Iconic, which this month received approval from competition regulators to buy the Midland Tribune and Tullamore Tribune titles.

Conditions were attached to that approval, however, due to Iconic’s status as a sister business to Mr Denmark’s Mediaforce advertising agency, whose clients include government agencies that place ads in regional papers.

In order to allay concerns at the Competition and Consumer Protection Commission (CCPC) that Mediaforce could direct advertising revenues towards its owner’s newspapers at the expense of competing titles, Mr Denmark’s company gave specific undertakings to avoid any favouritism. It also agreed to the appointment of an independent trustee to monitor its behaviour.

As all media mergers are generally assessed by the CCPC before being passed to the Minister for Communications for approval, it is expected that similar issues may arise in any Iconic deal for the Munster Express.

It is understood that Kieran Walsh, the managing director and editor of the Munster Express, has been attempting to sell the paper for some time. The paper, which serves Waterford city as well as parts of Kilkenny and Tipperary, is currently owned by the wider Walsh family.

When asked about the talks with Iconic on Monday, Mr Walsh replied: “I do not want to say anything.” Mr Denmark did not respond to a request for comment.

9 BOI to close 103 branches; locked out of Covid support; and the scourge of work email