Fourfold rise in profits at Ardmore studio to €1.35m 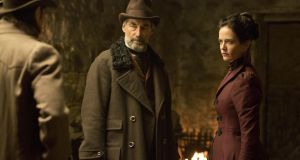 ‘Penny Dreadful’, which is filmed in Ardmore: the pennies have been mounting up at the film studio after a strong financial performance

Ardmore Film Studios has reported a fourfold increase in profit as it continues to recover from a slump that had threatened its future.

The film studio, in which U2 manager Paul McGuinness and accountant Ossie Kilkenny are majority shareholders, said it operated at close to capacity last year as it reported a profit of €1.35 million for 2014, according to accounts just filed with Companies Office.

“It was a very good year,”said Ms Ní Raghallaigh. “There were periods when we were at 100 per cent capacity and, overall, the figure was around 85 per cent of capacity.

“The impact of the new tax credit this year shows through in the number of enquiries we have had. We cannot help many of them because we are full,” she said. “Our investment programme and the addition of Ardmore Film Factory will ensure that Ardmore continues to attract world-class television and film productions.”

A new series of Penny Dreadful is the single largest project at the studio, where high-end television series such as The Tudors have been filmed, as have Moone Boy, Braveheart, My Left Foot and Excalibur.

Ms Ní Raghallaigh said there was demand for a lot more capacity in Ireland. “We need to scale up to bring it to another level,” she said, noting that international film projects were very mobile and would go where tax incentives, creative talent and locations dictated.

Ardmore has been in talks with Limerick City and County Council on a project to develop a major film and television production studio at the former Dell building in Castletroy which the council acquired in May for €6 million.