Eurovision: Raising a toast to Terry Wogan nine songs in 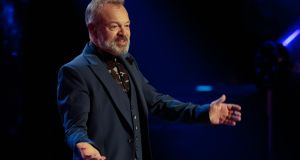 Graham Norton: advised by his Eurovision predecessor not to drink until song nine. photograph: pa images on behalf of so tv

When Terry Wogan died in January, Graham Norton tweeted in tribute that he would “raise a glass during song nine” – a reference to the sage advice Wogan gave him about not drinking too early during Eurovision commentary duties.

Norton, who succeeded Wogan in the BBC role in 2009, now plans an on-air toast to Wogan at song nine of Saturday night’s grand final.

Sweden’s entry, If I Were Sorry, by Frans, will occupy the ninth position in the running order and seems, to be fair, less likely than the average Eurovision performance to drive viewers to drink.

Luckily, people at home who neither want nor need for professional reasons to stay sober can use the European Broadcasting Union’s theme tune (the prelude to Te Deum, a 17th-century composition by Marc-Antoine Charpentier) as a signal to pop their corks, and indulge in any drinking game they fancy after that.

Wogan said he used to wait “until maybe song 11” before pouring himself a drink – traditionally a glass of Bailey’s Irish Cream with ice – in the commentary box, but in later years he found “the drinking got earlier and earlier” to help him cope with the absurdities of what he called Eurovision’s “triumph of appalling taste”.

If there are no displays of discounted Bailey’s on offer at your local supermarket this weekend, Diageo is missing a trick.