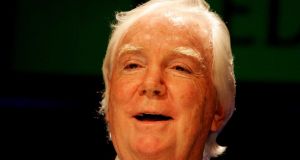 Sir Anthony O’Reilly’s former personal nurse is seeking to block recognition of his Bahamas bankruptcy in the US by claiming that the centre of his main interests was France or Ireland.

Sabina Vidunas, who is suing the businessman for reneging on a promise to give her millions of dollars in company shares after hiring her in 1995, is challenging Sir Anthony’s attempt to have his July 2016 bankruptcy recognised in the US.

The one-time billionaire is seeking a declaration in a court in Pittsburgh where he established himself as the former chief executive of food group Heinz to prevent Ms Vidunas reopening her long-running civil action against him seeking damages.

She first sued the Irish businessman in the Pennsylvania courts in 2013 but her case was on hold until late last year when she filed an application in court seeking to restart her case.

Court papers setting out the full details of her specific allegations against the one-time Independent News & Media chief executive have been sealed by the US court until 2037.

A US lawyer for Ms Vidunas filed an application in Western Pennsylvania’s bankruptcy court on Monday challenging Sir Anthony’s November 2018 request for a US declaration of bankruptcy.

She is claiming that the businessman’s centre of main interests, an individual’s place of habitual residence determining where he should be deemed a bankrupt, was not the Bahamas at the time he filed for bankruptcy there, but that he lived in France at the time and owned property there.

“While he owned property in the Bahamas at the outset of the Bahamas bankruptcy, the amount of time that he spends in France (and/or Ireland) in comparison with the time he spent in the Bahamas would support a finding that France was his habitual residence,” her lawyer states in her objection.

She told the court that Sir Anthony “chose to keep his chateau in France rather than his property in the Bahamas, supporting the fact that his ‘home base’ was France even then”.

Ms Vidunas referred to his “community or family involvement in Ireland or France rather the Bahamas”, his co-founding of the Ireland Funds charity and his being knighted by Queen Elizabeth for promoting peace in Northern Ireland as “evidence” supporting a finding that the Bahamas was not his main residence.

1 Who are Ireland’s 17 billionaires?
2 Fianna Fáil may have just pressed the pause button on the property market
3 My father in a nursing home wants to gift me his house
4 Are there annual limits on inheritances or gifts to a child?
5 Pensions in the spotlight, climate clash at Davos and confusion at O’Flynn empire
6 German fund pays €19.6m for Dublin 4 office block
7 Tipperary land holding of 800 acres seeking €11m
8 State subsidises public sector retirees to cover gap until State pension
9 Mixed-use investment in Greystones town centre guiding €5.5m
10 Corporate tax change is inevitable, says Donohoe
Real news has value SUBSCRIBE