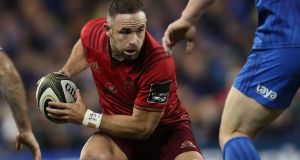 Munster’s Alby Mathewson in action. A third of men – and 43 per cent of men aged 25-34 – are subscribers to sports channels, research has found. Photograph: Billy Stickland/Inpho

One in four Irish people have subscribed to a paid TV sports channel package in the last 12 months, while 10 per cent have purchased pay-per-view access to a one-off sports event, according to research by communications consultants Teneo.

A third of men – and 43 per cent of men aged 25-34 – are subscribers to sports channels, with 31 per cent of men saying they have signed up to a pay-per-view event this year, the latest Teneo Sport and Sponsorship Index has found.

The nationally representative survey of 1,000 people found that two-thirds (65 per cent) like to consume sporting entertainment at home. This is significantly more than the 37 per cent who said they had attended a live sports event in the last year.

Some 36 per cent said they watched sport live as it is broadcast, but not at home, meaning they go to pubs or other venues to access it, while almost a fifth (19 per cent) said they used online streaming to watch live sports events inside the home.

Streaming sport on the go is a rising trend, Teneo said, with 12 per cent of people doing so over the past 12 months. This is most popular with younger sports fans, with one in four 18-24-year-olds streaming sport live to mobile devices compared with about one in 10 people aged 35-44.

Ms O’Sullivan said it would be “interesting to watch” how the broadcast rights market unfolded in light of Irish people’s “insatiable” demand for sport.

“It will be revealing to see how rightsholders and sports federations package and sell their rights to balance commercial return, opportunity to see, expansion into new markets and engagement with younger audiences in particular,” she said.

Not everyone is a sport fan: some 23 per cent of people – 16 per cent of men and 29 per cent of women – told researchers that they did not watch sports events either on television, online or at venues.

But for those who are, the year has proven ever more complex – and potentially expensive – if they want full access to key soccer, rugby and GAA fixtures, and there is little relief in store in 2019.

In rugby, certain Champions Cup and Pro14 games, including the Leinster and Munster Pro14 derbies, are now only available through the Eir Sport/BT Sport package. This is free for Eir broadband customers, but Sky and Vodafone television customers without Eir broadband must pay to access it, while the package is not available through Virgin Media to the frustration of many Virgin customers.

The broadcast rights to Premier League soccer matches are currently split between Sky Sports and the Eir Sport/BT Sport package. From 2019, with more fixtures to be broadcast overall, some 20 matches will be shown on Premier Sports, the new venture of Setanta Sports co-founder Mickey O’Rourke.

In the UK, these matches will be on Amazon Prime Video, which has already lured certain tennis rights away from Sky.

This year saw Virgin Media launch Virgin Media Sport, which carries exclusive Champions League soccer matches. The channel is free for Virgin television subscribers, but other Virgin customers and non-subscribers can pay to access it through an app.

Virgin has refused to rule out an aggressive bid for GAA rights in future. Since 2014, GAA fans have had to subscribe to Sky Sports if they want to watch every game at home, although live coverage of the All-Ireland senior football, hurling and camogie finals are among the designated events that must by law be free-to-air.

From 2019, Irish racing coverage is also moving to the subscription channel Racing TV. Rights to the meetings in question were previously held by At the Races, which had been available as part of a standard Sky package.

Interest in boxing and mixed martial arts, meanwhile, has led to resurgent revenues for pay-per-view events, and prices have gone up in recent years.

The research by Teneo and iReach also confirmed the trend for people to supplement their viewing with social media consumption, sometimes known as dual screening.

Half of those surveyed (51 per cent) said they checked social media while watching sport – a habit that can enhance the commentary around a televised event, but has also been responsible for viewers missing vital moments of sporting action.

“Dual screening has become the norm rather than the exception,” said Ms O’Sullivan. The practice allows sponsors and rightsholders to reach millions of highly engaged armchair fans, she said, transforming sports events “from a mass viewing experience to a mass conversation”.