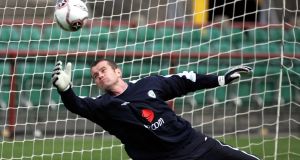 Goalkeeper Shay Given pictured at a Republic of Ireland training session at Lansdowne Road during his playing career. Photograph: Eric Luke

Accumulated profits at a UK media company owned by former Irish international goalkeeper Shay Given more than doubled to £232,457 (€258,406) in the 15 months to the end of last March, newly filed accounts reveal.

Given, who is Ireland’s second-most capped player after Robbie Keane, is the sole employee, director and shareholder of Eportia Ltd. The company was set up in 2012, when the goalkeeper was playing for Aston Villa.

The Donegal native retired from international football for a second time in July 2016, having won 134 caps. He finished his club career with Stoke City at the end of the 2016-17 season.

The registered office of Eportia Ltd is in Derby, where Given is currently working as goalkeeper coach for English Championship side Derby County.

The 15-month period saw the company’s accumulated profits increase to £232,457 from £105,187 during the previous financial period.

Given played for a number of clubs including Newcastle United, Manchester City and Sunderland during a career that spanned 23 years. He played for the Republic at the 2002 World Cup and the European Championships in 2012.

He was also selected in the squad for Euro 2016 but didn’t appear in any of the team’s four matches at the tournament.

1 Should my mam wait for house prices to drop before buying?
2 Irish whiskey sales near milestone of 12m cases a year
3 McCanns’ Balmoral sees property value hit from Covid-19
4 Pilita Clark: Why we’re about to learn if we are really in the A-team
5 Hard-hit SMEs get ‘paltry’ €11m worth of loans under State scheme
6 ‘I have a talent for justifying purchases’
7 ‘I’m so lucky to be in the Caribbean – a million miles from Derry Girls’
8 US ‘hard seltzer’ drink White Claw launches in Ireland
9 Citigroup warns that markets are out of step with reality
10 Joint accounts: if one of us dies, can the other access the money?
Real news has value SUBSCRIBE

McCanns’ Balmoral sees property value hit from Covid-19 07:38
Hard-hit SMEs get ‘paltry’ €11m worth of loans under State scheme 06:30
Pilita Clark: Why we’re about to learn if we are really in the A-team 06:00
‘I have a talent for justifying purchases’ 05:20
Irish whiskey sales near milestone of 12m cases a year 05:00
Search executive
jobs on irishtimes.com