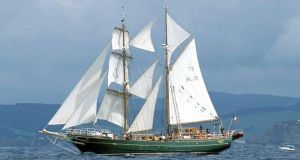 The Asgard II, which sunk off the French coast in 2008. Photograph: Coiste an Asgard/PA Wire

Eight young people will sail to Belfast today on board a 60-foot racing yacht the Kilcullen Voyager to launch the campaign.

The Atlantic Youth Trust, which has been working on the project for the last two years, is chaired by Lord Glentoran and the president is Enda O’Coineen.

“The new vessel will have twice the capacity of Asgard II, and take over 1,000 young people a year in the 15 to 18 age bracket, North and South and from the diaspora, on the ocean for adventure, challenge and personal development,” said Mr O’Coineen.

Over €200,000 seed funding has come from private benefactors. Matheson have provided provided legal services and Ernst & Young have just completed a cost benefit analysis on a pro bono basis. “It builds a compelling and strong business case for the project – starting with youth and education to harness our island’s maritime resources,” said Mr O’Coineen.