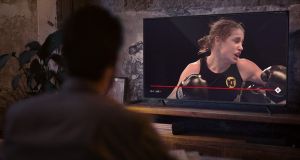 Fights involving athletes such as Katie Taylor will be included in the schedule for DAZN’s service.

Sports streaming company DAZN will launch in the Republic in May, but the boxing focused group is yet to reveal the price Irish customers will pay to access its service.

DAZN, pronounced Dazone, is a sports streaming subscription service that launched in 2016 and is available in Japan, Germany, Austria, Switzerland, Italy, Spain, Brazil, Canada and the United States. The prices charged in some countries range between €10 to €20 per month, with discounts for annual subscribers.

The first global event on the service is scheduled to be Canelo Álvarez’s soon to be announced fight to take place on May 2nd.

The company said the first phase of its global expansion will be an English-language service focused on boxing. It holds rights to matches from promotional companies such as Golden Boy Promotions, Matchroom Boxing USA and GGG Promotions.

“Beginning this spring, most of the world will have access to DAZN and its unmatched schedule of boxing events,” said executive chairman John Skipper. “Our roster of championship fighters represents some of the world’s most popular athletes and we’ll be working with them to stage spectacular international events for years to come.”

A spokesman said the pricing schedule for the service will be announced in the coming weeks. It is unclear whether boxing matches are offered on a pay-per-view basis, as is often the case as it stands.

DAZN’s service will be available on devices including smart TVs, smartphones, tablets, desktop computers and game consoles. The business was originally established under the Perform Group, a sports media company in which billionaire Leonard Blavatnik held a majority stake.

The company recently won rights to the high profile boxing rematch between Deontay Wilder and Tyson Fury in some of its territories.