As newspapers reach tipping point, who else can be our arbiters of truth? 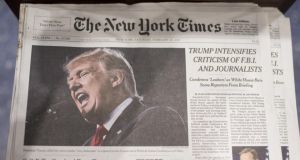 Climate scientists frequently describe a tipping point at which the heating of Earth becomes irreversible, and the fear is whether we have already reached such a cataclysmic moment.

Perhaps it is time to ask if we are approaching an equivalent point in the decline of the traditional news media. Could we be facing a moment when the industry loses its capacity to act as an arbiter of truth for a significant enough proportion of the population that it has an irreversible impact on broader social stability? Could the Brexit vote and the election of Donald Trump be the social equivalent of melting glaciers and disintegrating Arctic ice shelves, ominous portents of a wider unravelling?

I raise the question as the latest strategy in the battle to defend newspapers is unveiled in the United States. The News Media Alliance, a US group that includes the New York Times, the Wall Street Journal and nearly 2,000 other publications among its members, announced an effort to win the right to negotiate collectively with the likes of Google and Facebook, which are hoovering up the vast bulk of digital advertising at the expense of traditional news organisations.

US antitrust legislation prevents such collective bargaining, but the papers are arguing for dispensation. “If they open a unified front to negotiate with Google and Facebook – pushing for stronger intellectual-property protections, better support for subscription models and a fair share of revenue and data – they could build a more sustainable future for the news business,” according to an opinion piece by the alliance’s president, David Chavern, in the Wall Street Journal.

I suspect neither Facebook nor Google is delighted to have the media’s blood on its hands. It’s not as if they set out to undermine the free press

I suspect neither Facebook nor Google is exactly delighted to have the media’s blood on its hands. It’s not as if they set out to undermine the free press when they drew up their business models. And although it may not be a priority for them, nor is it in their interest to see the news media collapse. Just last week Google pledged €21 million to European journalism projects, the latest instalment of its €150 million Digital News Initiative, in which The Irish Times is a partner.

I have been sceptical about the special pleading from sections of the media about the urgent need to protect it from technological disruption, but recent events make it impossible to ignore how the waning influence of the traditional news media is coinciding with a dangerous rejection of expertise and enlightenment thinking. Is it a coincidence that a sense of commonly held truths is fraying along with the news industry? Is it a coincidence that the penalty for public figures lying shamelessly appears to have evaporated at roughly the same rate as news-media revenues?

These reasons are exactly why the news media deserves special consideration – unlike, say, 19th-century textile workers or 20th-century travel agents. Journalists play a critical role in establishing fact from fiction.

This goes far beyond the overhyped threat from “fake news”, although it is related: bogus stories spreading online are a symptom of an uninformed populace rather than the direct cause.

Viral stories peddling fabricated facts arise to satisfy a demand for narratives that bolster tribal identities, especially those viewpoints that would be undermined by too much exposure to facts. There is an uneven appetite for accurate depictions of reality, unfortunately, and a desire for impartial fairness should not blind us to the fact that the demand for these bogus stories comes largely, although not exclusively, from the right.

The capacity of large numbers of people to believe nonsense peddled by public figures and publications that proclaim to represent their tribal identity shouldn’t surprise us. That’s how most religions function, and humans have a fondness for religious belief that endures no matter what science tells us. But the phenomenon of some people insisting that their ignorance is as valid as other people’s knowledge is deeply insidious and corrosive to society at large.

Whatever strategy the News Media Alliance devises to salvage a business model for US newspapers, the scale of the problem is fast extending beyond the mere death of a business model. I suspect that merely redistributing money from the likes of Google and Facebook to prop up newspapers will not suffice to tackle this problem, because the wider threat from the disruption of newspapers and the rise of social-media platforms is a collapse in public faith in journalism.

Truth has always been a contested currency, of course, but we need to recognise the degree to which the news media in its diverse forms has functioned as a reasonably effective arbiter of that truth.

Brexit and Trump are just a taste of the crises our society will suffer if truth and reality become increasingly contested, if ignorance and knowledge become equally valid in public discourse. It is telling that climate science is one of the areas where reality is most contested. With luck it is not too late to heed the warning signs.