Mary Mulvihill: A pioneer who blazed a trail for other women 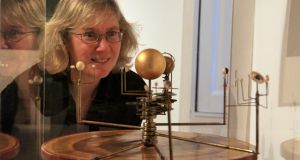 The late science journalist Mary Mulvihill, who helped to mould a whole generation of science and tech writers and editors. Photograph: Brian Dolan

Every budding science or technology writer needs a Mary Mulvihill. Mary, Ireland’s beloved science communicator who died three years ago, aged only 55, is perfectly remembered and celebrated with the Mary Mulvihill Award for science writing.

This year’s first prize, on the competition theme of Science: Whose facts? Whose truth? went to Trinity College Dublin postgraduate Katie Carbonara. Her fiercely passionate, provocative and stylish essay questioning science’s own biases signals a writer and thinker of promise.

Abeba Birhane and Siobhán Grayson, PhD students in cognitive science and computer science at University College Dublin, received the runner-up prize for their jointly written, well-researched, engaging essay on the pervasiveness of secretive algorithms with hidden biases that can influence society at the deepest levels.

As one of the judges in this year’s competition, I was delighted by these two very different but equally inspiring pieces, each invested with the same spirit Mary brought to her own work – probing curiosity and hard-earned knowledge forming the foundation of a lively, accessible science communication.

I love the idea that, through this annual competition and its celebration of science writing, Mary’s guiding touch lives on, influencing fledging writers and – as I truly hope with Katie, Abeba and Siobhán – encouraging them to further explore their communication talents.

Just as Mary once encouraged me. I was fortunate to be one of those people in Ireland who, over many years, had this endlessly energetic, enthusiastic, generous science writer, editor, broadcaster, tour leader, consultant, researcher and explorer (what didn’t she do?) as a shaping force in their lives.

Mary commissioned numerous pieces from me when she was co-editing the magazine Technology Ireland in the 1990s. At the time, I was doing freelance work as a journalist and had mostly focused on the ready market then for features on every possible topic anyone would pay me to write about.

But I particularly loved writing about technology, a subject that was only just beginning to make its way into mainstream newspapers. Technology was gradually becoming of more general interest, especially as the internet was a new thing in businesses and an increasing number of homes.

The very first tech piece I had published anywhere was a feature in this newspaper, on resources for women on the internet at a time when the net was dominated by men. This was so long ago that though I included some addresses for sites on the newfangled world wide web, I also noted some sites where you could FTP over files of interest (millennials will need to go google FTP).

Not long after, Mary approached me out of the blue to try my hand at apiece for Technology Ireland. A real magazine. And a chance to write on some serious tech research topics. I was thrilled and in awe of Mary’s expertise across so many areas. And to be honest, slightly fearful of same, because I wondered if writing for her would expose and confirm my worst imposter syndrome anxieties.

But no. She had a talent for identifying and encouraging everything a person could do well, while gently (if firmly) suggesting areas where a writer might expand more here, or refocus over there. In short, she was the ideal editor, open to story pitches, trusting in her writer’s abilities, honest about a piece of writing but without censure, having a true mentor’s instinct for looking forward, shaping a person towards what they could do.

Under that support and guidance, I soon found that the freelance technology subjects she let me try my hand at, became a passion and a career.

But helping to mould a whole generation of science and tech writers and editors in Ireland, is only a tiny portion of Mary’s legacy.

Because of course, the most important beneficiary has been you. All of you. The students who in schools across the country, studied her books on Ireland’s scientific legacy and great scientists – including so many women whose achievements across science and technology were half-forgotten but rightly restored and celebrated.

The readers who discovered new interests through Mary’s regular pieces in this newspaper over the years as well as in Technology Ireland and other publications, and read her books, such as the ground-breaking Ingenious Ireland.

The listeners who were inspired by her exploration of every aspect of science on radio and in her podcasts and walking tours, which revealed the most surprising facts about the hidden science all around, whether on the streets of Dublin or in the Botanic Gardens or her much-loved Dead Zoo, the Natural History Museum.

Much of Mary’s best work, including her Ingenious Ireland lectures and downloadable walking tours, are archived on the Mary Mulvihill Award website, here:marymulvihillaward.ie/mary-mulvihill/further-reading/, where, thankfully, they can continue to inspire and entertain.