UK-based airlines and tour operators TUI , Easyjet and IAG fell after the UK imposes quarantine on arrivals from France 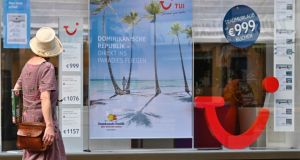 The world’s largest tour operator TUI said on Thursday that it slumped to a huge loss in the third quarter as the coronavirus pandemic ravages the global travel sector. Photograph: Tobias Schwarz/AFP via Getty Images

European shares slid in thin summer trading on Friday as travel stocks took a hit after Britain added more countries from the continent to its quarantine list, while weak retail sales data from China raised doubts over the pace of an economic recovery.

The pan-European STOXX 600 fell 1.6 per cent, with travel and leisure dropping 3.0 per cent, the biggest sectoral decliner. Banks, oil and gas firms and construction and materials companies fell over 2 per cent.

UK-based airlines and tour operators TUI , Easyjet, British Airways-owner IAG fell between 6 per cent and 7.6 per cent after the UK imposed a 14-day quarantine on arrivals from France, beginning Saturday.

It also added the Netherlands, Malta and three other countries to the list.

France, the second-most popular overseas destination after Spain for Britons, warned that it would reciprocate. Paris-listed shares fell 2.0 per cent, with Air France KLM dropping 5.9 per cent.

“What we have got is a significant amount of uncertainty over the evolution of coronavirus pandemic, which is maintaining a risk premium for the transportation, leisure and hospitality sectors,” said Alastair George, head strategist at Edison Investment Research.

Global markets were sluggish as China’s retail sales showed a surprise drop in July, while the factory sector’s recovery struggled to pick up pace, dimming prospects of a speedy rebound from the coronavirus crisis.

Official data, due for release this morning, is likely to confirm that euro zone economy suffered its deepest contraction on record in the second quarter.

Meanwhile, senior officials from China and the United States will hold a video conference on Saturday to review their Phase 1 trade deal signed in January, amid souring diplomatic relations between the two countries.

Investors also await progress in negotiations over US economic stimulus, a factor that has helped push US stocks to near all-time highs.

Despite Friday’s pullback, European stocks are on course for their second straight week of gains on optimism over the development of a Covid-19 vaccine and more stimulus for ailing global economies.

Among top individual movers, German container shipping line Hapag-Lloyd surged 10.3 per cent as it nearly doubled net profit in the first half of 2020 and kept its full-year outlook intact. - Reuters

1 Air travel never going ‘back to way it was’
2 Coronavirus vaccine: 15 billion doses needed to inoculate the planet
3 Should I switch bank now with Ulster Bank at risk of closing?
4 South Dublin land at €19m has scope for up to 500 homes
5 Bank of Ireland sees more than 1,400 staff apply for redundancy
6 Will brother’s widow get half of our parents’ estate when they die?
7 Retailers creaking under lockdown rents as industry warns ‘Nama-like’ problem ahead
8 Tánaiste urges businesses to brace for Brexit with 100 days to go
9 Why working in an office beats living at work
10 Pallet manufacturer looks to imports as timber crisis takes root
Real news has value SUBSCRIBE