Paper and packaging group Smurfit Kappa the big loser, closing down 3.6% at €16.20 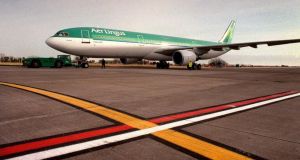 There were contrasting fortunes for Aer Lingus and Ryanair yesterday


European stocks were little changed as Russia restarted military drills along its border with Ukraine, offsetting gains by companies from Alstom to Telekom Austria on increased mergers-and-acquisitions activity.

National benchmark indexes climbed in 10 of the 17 western European markets that were open. Iceland’s market closed for a public holiday to celebrate the first day of summer.


DUBLIN
Paper and packaging group Smurfit Kappa was the big loser of the day, closing down 3.6 per cent at €16.20. Traders said this was due to weak pricing data in Europe, particularly in Germany and France.

Food group Glanbia was also down by more than 3 per cent but on low volumes.

Bank of Ireland finished 2.1 per cent lower at 27.7 cent. This was attributed to a few investors “de-risking” ahead of the bank’s trading update and agm today.

Kenmare Resources was the biggest gainer on the main market, closing up 7.9 per cent at 16.4 cent. In a trading update, the company reported continued good demand for its core product, ilmenite.

It said a recent deal with lenders to restructure its debt in line with its ability to generate cash would, assuming price increases come through, allows the company to begin paying dividends in “due course”.

There were contrasting fortunes for Aer Lingus and Ryanair . While Aer Lingus closed up 2.2 per cent at €1.595, Ryanair finished the day 0.8 per cent lower at €7.465. Aer Lingus announced that director William Slattery had acquired 26,295 shares in the airline at between €1.54 and €1.57.

The five most traded stocks on the day were Smurfit Kappa, CRH, Ryanair, C&C and Bank of Ireland.

Anglo American increased 1.3 per cent after reporting that quarterly output for copper, coal and nickel beat projections. Unilever fell the most in almost two months after saying revenue growth slowed from the fourth quarter.

AstraZeneca rose 3.3 per cent to 4,175 pence, the highest price since at least 1993. Shares have rallied for five days amid reports saying Pfizer discussed acquiring the London-based drugmaker in informal, now-discontinued talks.


EUROPE
Konecranes Oyj slid 3.5 per cent after reporting first-quarter sales that missed analysts’ estimates. Alstom climbed 11 per cent after people familiar with the matter said General Electric has held talks to buy the French trainmaker. The companies may announce an agreement as early as next week, the people said.

Telekom Austria jumped 6.3 per cent after America Movil SAB said it will buy out the company’s minority shareholders. Technip added 8.8 per cent after posting profit that beat projections.


US
US stocks rose in early trading, with the Standard and Poor’s 500 Index near a record, as better-than-forecast earnings from Apple and Facebook boosted technology shares.

Apple jumped 8.1 per cent after selling more iPhones than analysts predicted. Zimmer Holdings surged 12 per cent after it agreed to buy rival orthopaedic-device maker Biomet in a deal valued at $13.4 billion.
– Additional reporting by Bloomberg