Iseq down 2.2% in Dublin as Ryanair declines and food groups Kerry and Glanbia sink 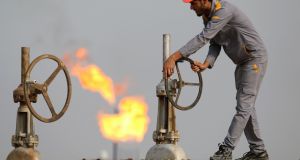 Oil prices jumped after US president Donald Trump said he expected Saudi Arabia and Russia to reach a deal soon to end their price war helped improve the general tone in markets. Photograph: AFP via Getty

Oil prices jumped after US president Donald Trump said he expected Saudi Arabia and Russia to reach a deal soon to end their price war helped improve the general tone in markets.

It was another weak session for Dalata Hotel Group, which declined 2.5 per cent to €2.50, but other stocks had a better day, with building materials group CRH, the largest stock on the index, adding 0.8 per cent to €24.34 and packaging company Smurfit Kappa rising 2 per cent to €26.02.

There were contrasting fortunes for bank stocks, with AIB falling 3.6 per cent to 91 cent and rival Bank of Ireland posting a 1.3 per cent climb to €1.69.

Surging oil prices lifted UK’s commodity-heavy FTSE 100 by 0.5 per cent, although the mood was fragile as Britain saw a record surge in deaths from the coronavirus pandemic that threatens to plunge the world economy into a deep recession. The FTSE 250 fell 0.8 per cent.

Energy majors BP and Royal Dutch Shell gained 5.9 per cent and 9.4 per cent, respectively, as oil prices rallied on hopes of Saudi Arabia and Russia reaching a truce to end their oil price war.

Cruise operator Carnival, which has been badly affected by the coronavirus outbreak, plunged more than 20 per cent as it readied a bumper capital raise to help tide it through severe curbs on its business.

Hays, one of the world’s biggest recruiters, slumped 13 per cent after announcing an emergency issue of shares. The mid-cap stock has been forced to prop up its finances amid the slowdown in hiring.

Aer Lingus owner IAG initially rose 2.9 per cent after reports that the company was in talks with its union about a plan to suspend about 32,000 staff in response to the outbreak. The stock closed down 1.2 per cent.

The pan-European Stoxx 600 closed a volatile session 0.4 per cent higher, recovering from a sink into negative territory, with the energy sector the biggest boost to the benchmark.

European energy stocks showed signs of recovering from 24-year lows amid hopes that the price war between Saudi Arabia and Russia might end.

Travel and leisure stocks were the worst performers for the day, while technology shares also dropped, with French software firm Dassault Systemes shedding more than 5 per cent after it warned of lower first-quarter revenue.

Wall Street bounced on Thursday as hints of a deal between Russia and Saudi Arabia drove a record 30 per cent surge in oil prices, outweighing the shock of a jump in US jobless claims to 6.65 million.

The S&P energy index, down by half this year, gained 12 per cent, with double-digit gains for majors Exxon Mobil and Chevron helping drive a more than 1 per cent rise for both the S&P 500 and the Dow.

Boeing traded down 3 per cent after it said it would offer buyout and early retirement packages to employees, as a near collapse in business activity crushes liquidity and sparks mass staff furloughs.

Walgreens Boots Alliance fell 6 per cent after the drugstore retailer reported a steep decline in US same-store sales in the last week of March. – Reuters.