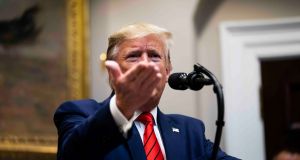 European shares rose on Thursday as signs of progress in US-China trade talks and traces of optimism about Brexit helped investors look past weak economic data and negative corporate updates.

Investors took heart after US president Donald Trump tweeted he would meet Chinese vice premier Liu He on Friday for further trade talks.

It was a good day for banking stocks, with AIB adding 5.5 per cent to €2.76 and Bank of Ireland 3.8 per cent higher at €3.79. Paper and packaging group Smurfit Kappa was another climber, finishing up almost 1.5 per cent at €27.54, having initially traded lower after a weak earnings update from peer Mondi.

The FTSE 100 pulled itself into positive territory, ending 0.3 per cent higher after a rollercoaster session. Spirits company Diageo, consumer goods giant Unilever and AstraZeneca were among stocks hammered the most, however, causing the FTSE 100 to lag other major indexes.

Stocks vulnerable to a hit from Brexit, on the other hand, overpowered those losses. Lloyds topped the main board with a 4 per cent leap, while Royal Bank of Scotland added 3 per cent.

Mining heavyweights, which rely on world’s top metals consumer China for a chunk of their profits, were the biggest sector-wise boost, climbing 2.5 per cent.

Packaging group Mondi reversed earlier losses to close 2 per cent higher after a third-quarter update, while homewares retailer Dunelm slumped 10 per cent to the bottom of the mid-cap index after it flagged a softer market.

Despite the session gain, the FTSE 100 confirmed a “death cross” pattern, meaning its 50-day moving average fell below a level traditionally seen as a warning sign of further near-term losses.

The pan-regional Stoxx 600 index closed up 0.7 per cent. Louis Vuitton owner LVMH’s 5.6 per cent jump on strong sales, despite its exposure to Hong Kong, was the biggest boost to the index and lifted stocks across the luxury goods sector.

Gucci-owner Kering, Christian Dior and Moncler all climbed, with the Paris-listed names pushing the French index up almost 1.3 per cent, for its best day in six-weeks.

Dutch health technology company Philips lost 8.8 per cent after the firm said it would miss its 2019 target for profit margin improvement.

Wall Street rose by about 1 per cent in the first half of the session on hopes that top-level US-China trade talks would yield at least a partial deal. A rise in Apple’s shares also lifted the technology sector.

Among other stocks, Delta Air Lines fell 3.5 per cent, the most on the S&P 500, after the carrier forecast disappointing current-quarter profit. Cisco Systems dropped 2 per cent, after a report that Goldman Sachs downgraded the network gear maker’s shares to “neutral”. – Additional reporting: Reuters.