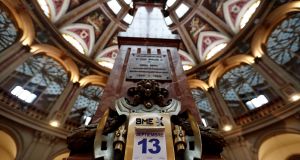 Lucky for some: a calendar marks the date as Friday the 13th in Madrid’s Stock Exchange. Photograph: EPA

Shares globally were headed for a third weekly gain thanks to easing fears of a trade war and a new round of central bank stimulus.

There was positivity across the board as markets reacted to news that a deal could be inching closer in the UK’s contentious divorce from the European Union, and better economic data in the US helped to fuel optimism.

Traders noted the uplift in shares, from construction and banking to airlines, with plenty of green on the screen to finish out the week.

Shares in AIB rose 6.28 per cent to close the day at €2.74, while Bank of Ireland climbed almost 4 per cent to finish just under €4.05. The latter’s rebound followed a tougher day on Thursday, when it closed at €3.892. It matched a general air of positivity among banks across Europe.

Ryanair, meanwhile, was up almost 4 per cent at €10.42, slightly behind its European peer EasyJet.

UK stocks ended Friday on a high note as optimism that a no-deal Brexit could be avoided spurred a rally in stocks with domestic exposure, overpowering losses in blue-chip exporter stocks that were hit by a stronger sterling.

The FTSE 100 rose 0.3 per cent, with homebuilder Barratt jumping nearly 6 per cent to top the gainers. The country’s big banks – Lloyds, Royal Bank of Scotland and Barclays – added more than 5 per cent. The mid-cap index climbed 1.2 per cent to a near one-year high, tracking gains in the local currency. A surge in sterling was triggered by a media report that the DUP had agreed to accept some European Union rules after Brexit. Adding to the positive sentiment, British prime minister Boris Johnson said there was “the rough shape of a deal to be done” over Brexit, as he prepared to meet European Commission president Jean-Claude Juncker next week in a renewed push to reach an agreement.

European shares were higher for a fourth straight session, although gains were muted after a rise of nearly 6 per cent over the past four weeks. The pan-European Stoxx 600 index rose 0.37 per cent and MSCI’s gauge of stocks across the globe gained 0.45 per cent. MSCI’s index was on pace for an eighth straight day of gains, its longest winning streak in nearly two years.

The Stoxx Europe 600 rose a fourth day led by banks and miners.

France’s CAC40 rose marginally, gaining 0.2 per cent over the session, while Germany’s Dax was up 0.4 per cent.

US stocks were mostly higher as the rotation from growth to value shares carried on. Higher-than-forecast US retail sales in August added to the optimism.

Positive sentiment over a trade deal is growing ahead of expected high-level talks next month between the world’s two largest economies.

The S&P 500 climbed to just 0.5 per cent below its all-time high on Thursday after news broke about an interim trade agreement under consideration by the Trump administration. On Friday, soybean futures extended a rally from a day earlier after the Xinhua News Agency said China is encouraging companies to buy certain US farm products and it will exclude those goods from additional tariffs.

Elsewhere, WTI crude fluctuated around $55 a barrel, poised for a weekly drop following a warning from the International Energy Agency of a “daunting” surplus of crude in 2020. – Additional reporting: Bloomberg, PA, Reuters