Shares fall back as investors fret about slowing global growth 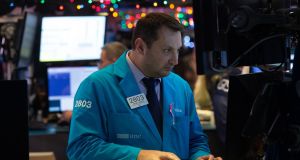 Europe’s share markets fell back into the red on Thursday, as investor worries about slowing global growth in the face of rising US interest rates and trade tensions outweighed crucial Brexit progress. Chinese markets had extended their slump in Asia amid the trade war with the United States, and with Wall Street closed for Thanksgiving and trading therefore lighter than normal, Europe followed suit. The region also had plenty to keep it busy.

A disappointing batch of company earnings added to the stocks gloom but Italian bonds rallied for a second day as sparring continued over its budget and sterling jumped as London and Brussels agreed wording on a Brexit transition deal.

The dollar also edged lower for a second day as traders sold the greenback going into Thanksgiving and after Wall Street had seen Apple shares, which have slumped $280 billion in recent weeks, fail with an attempted rebound

Trading volumes were down across Europe on account of the US market being closed, but the Iseq was busier than expected. The index fell 34 points to close at 5,858. One of the main drags was Smurfit Kappa, which fell 4.5 per cent to €24.20 on foot of weak pricing data in the packaging industry. Travelling in the opposite direction Ryanair was lifted 3.3 per cent to €12.30 amid news of political breakthrough in Brexit talks between Brussels and the UK. The airline’s chief marketing officer Kenny Jacobs said earlier this week that Ryanair was not seeing any impact from Brexit on demand for flights and is prepared for a no-deal Brexit.

Several Dublin-listed builders, including Glenveagh, Ires Reit and Hibernia Reit, were also buoyed by more positive Brexit news, all rising by 0.5 to 1 per cent. Cairn Homes, however, rose by over 4.5 per cent to €1.39 on foot of a sequence of positive news, including a notice that it plans to build 107 apartments in Dublin 6.

Bank of Ireland and AIB were down 1.5 per cent and 1.3 per cent in keeping with a general drag on European financials.

UK shares fell sharply on Thursday as sterling rallied after the European Commision and Britain agreed on a draft text for future EU-UK ties after Brexit, with Centrica, Fresnillo and other mining stocks leading the decline.

Some of the biggest fallers – Vodafone, Imperial Brands, DCC, National Grid and Evraz – went ex-dividend, taking around 9.8 points off the index. The FTSE 100 closed down 1.3 per cent, handing back the previous session’s gains and underperforming its euro zone counterparts as the pound surged on positive news from Brussels midmorning.

Britain and the EU have agreed in principle to a text setting out their future relationship that can be endorsed by EU leaders at a summit on Sunday. The deal sent the pound up as much as 1 per cent on relief that prolonged and tense negotiations had shown progress.

The FTSE 250 was down 0.3 per cent. With US markets closed, volumes were lower than usual. Energy, mining and consumer staples accounted for more than half of the losses. Fresnillo was the biggest faller, down 12.1 per cent for its biggest one-day fall in two years, after Morgan Stanley downgraded the stock on fears the company will find doing business in Mexico much harder following the passage of recent legislation. Utilities were also in focus after earnings from Centrica and Severn Trent. Centrica hit March’s lows for its worst day in a year after the energy supplier reported losing customers, lower nuclear power generation and a fall in output at its oil and gas division. Severn Trent dropped 0.9 per cent after its results.

Among the mid-caps, Rotork slumped 9.1 per cent to the bottom of the index as investors focused on the drop in its third-quarter order book, rather than an in-line set of results. Investec analysts say the shares look overvalued based on their earnings outlook.

Europe’s tech sector duly lost another 0.75 per cent, but it wasn’t the worst performer. Banks fell as much as 1.6 per cent and mining companies and other resources firms dropped nearly 2 per cent before clawing some ground back. The falls also reflected the bitter Sino-US trade war, encouraging investors to take money off the table before US president Donald Trump and his Chinese counterpart, Xi Jinping, meet in Argentina next week.

The focus is on whether they can make any progress on their trade feud. Countries belonging to the G20 group of the world’s biggest economies applied 40 new trade restrictive measures between mid-May and mid-October, covering around $481 billion of trade, the World Trade Organisation said on Thursday.