Euro and stocks dip ahead of tight election in France 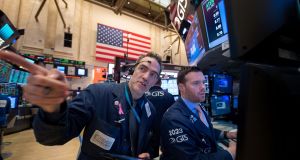 The Dow Jones Industrial Average was down 23.31 points, or 0.11 per cent, in early trade on Friday. Photograph: Bryan R Smith/AFP/Getty Images

The euro and stocks dipped on Friday ahead of the first round of the French presidential election. Far-right leader Marine Le Pen, who wants to ditch the euro and narrowly trails front-runner Emmanuel Macron in French opinion polls, seized on the killing of a policeman by a suspected Islamist militant in Paris to push her policies on national security.

The Iseq bucked the pan-European trend somewhat, rising 21 points to 6,739. Dairy and ingredients group Glanbia gave up some of its gains from earlier in the week, closing down 1.3 per cent at €18.94. Rival Kerry also fell 1 per cent to €76.31.

Hotel group Dalata finished up nearly 1 per cent at €4.82 while insulation maker Kingspan was unchanged at €29.50 ahead of trading update next week.

Iseq heavyweight CRH, meanwhile, was up again, rising nearly 2 per cent to €32.44 in line with others in the building sector with links to the US economy.

British shares inched lower on Friday, scoring their worst weekly losses since early November after Tuesday’s surprise call for a national election caused equities to fall. The FTSE 100 fell 0.1 per cent, ending a week in which UK prime minister Theresa May called a snap election, with a fall of 2.9 per cent, erasing year-to-date gains for the FTSE.

Energy stocks were top weights on the FTSE as crude prices retreated, while consumer staples weakened. Reckitt Benckiser fell 0.8 per cent after its first-quarter sales disappointed.

Merger moves continued to move stocks, and mid-cap WS Atkins rose 6.1 per cent to an all-time high after Canadian engineering firm SNC-Lavalin Group firmed up its $2.67 billion offer to buy the firm.

Phone and broadband provider TalkTalk gained 4.7 per cent after HSBC upgraded the stock to “buy” from “hold”.

European shares were little changed, though France’s CAC-40 dropped, in the final trading session before the nation’s presidential election on Sunday.

Food giant Danone dropped as much as 2.9 per cent after reporting the third consecutive quarterly drop in volume and including its $10 billion takeover of WhiteWave Foods Company in its organic growth for the year.

Shares of General Electric fell 1.1 per cent to $29.94 after the company reported negative cash flow from its industrial operations in the first quarter.

Schlumberger was down 3.1 per cent at $74.17 after the oilfield services provider warned that margins would remain under pressure as it spends more to bring back idled equipment. The stock was the biggest drag on the S&P.

Mattel fell as much as 11.3 per cent to an 18-month low of $22.35 after the toymaker reported a bigger-than-expected quarterly loss.