Rising US Treasury yields affect shares as Europe edges ahead

In Dublin shares at AIB, Bank of Ireland and Datalex rise on day of solid volumes 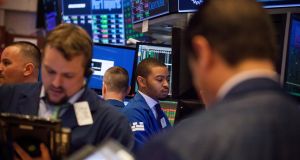 European shares edged up on Monday as a rise in US Treasury yields helped lift bank stocks to nearly five-week highs, more than offsetting a disappointing update from UBS and losses among bond-proxy sectors.

London’s blue-chip index made gains as the pound continued to fall on expectations that the Bank of England would delay an interest rate rise.

The Iseq edged ahead by 0.2 per cent on solid trading volumes.

Bank of Ireland, which was up 1.8 per cent to €7.52, and AIB, up 2 per cent to €5.15, both took advantage as European banks generally performed well on the back of rising bond yields.

Datalex, the travel software firm backed by Dermot Desmond, spiked by more than 7 per cent after a hungry buyer entered the market late in the session.

GAN, the gaming tech company backed by the Smurfit family, continued its recent good run on the back of positive newsflow such as the extension of deals with Paddy Power, as well as new senior hires. It closed up 6 per cent at 35 cents.

Capita’s share price surged despite its chief executive Jon Lewis announcing a £513 million loss. He also said the firm was tapping investors for £700 million. The proceeds will be used to reduce Capita’s debt and make investments. The group was hammered on the stock market earlier this year after warning over profits, but by the close on Monday its shares soared 13.14 per cent.

Shares in Clarkson tumbled as the shipping services giant warned over profits after being blown off course by a “challenging environment”. It said profits for both the first half and full year will be “materially below those of last year”. It blamed choppy conditions in shipping and offshore capital markets. Its shares fell 17.87per cent.

Carpetright’s biggest shareholder, Meditor, upped its stake in the retailer on Monday, just days before landlords and creditors voted on a rescue deal for the firm. Meditor upped its stake from 16.5 per cent to 29.99 per cent , just shy of the threshold at which it would have to make a formal takeover bid for the retailer.

Swiss bank UBS fell 2.5 per cent, among the top STOXX losers despite reporting first-quarter earnings ahead of analysts’ estimates. The bank struck a cautious note for the coming quarter.

Financials, which benefit from rising yields, however, were broadly positive with the banking index up 0.75 per cent.

Italian banks rose 1 per cent to their highest level in more than two years after a report said the ECB was considering shelving planned rules that would have forced banks to set aside more capital against unpaid loans.

Consumer staples stocks, which investors hold as proxies to bonds for their stable revenues and income stream, took the most points off the STOXX index after US yields hit their highest level since January 2014 before paring gains.

Nestlé, AB InBev and Unilever were among the worst-hit, falling 0.2 to 1 per cent. Reckitt Benckiser shares tumbled 1.9 per cent, dented by a price target cut from JP Morgan.

Heading into the afternoon, the S&P technology index was up 0.6 per cent, leading gains among the 11 major S&P sectors. This was ahead of post-close results announcements due from some of the tech heavy-hitters such as Facebook, Microsoft, Amazon and Intel. Alphabet. Merck rose 1.4 per cent after Goldman Sachs upgraded the stock to “buy”.

Caterpillar also rose 0.9 per cent after Citigroup upgraded to “buy”.

Shares of aluminium companies fell after the US opened the door to sanctions relief for Russian aluminium giant United Company Rusal. Alcoa tumbled 11.5 per cent and Arconic’s 3.3 per cent drop made it the biggest loser on the S&P.