Iseq finishes up just 0.1 per cent higher on a day of mixed fortunes for its biggest stocks 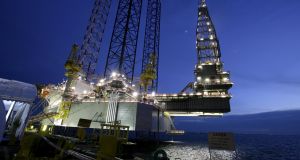 Oil majors Royal Dutch Shell and BP were both up about 1.5 per cent as oil prices hit their highest in over three years after a report that top exporter Saudi Arabia was pushing for higher prices. Photograph: Reuters

Earnings and trade anxiety set the tone on stock markets, amid a mixed slate of results. The FTSE 100 in London rose after commodity stocks were boosted by surging oil prices and merger & acquisition (M&A) activity, but European shares ended the day flat, while Wall Street also lingered in the red.

The Iseq finished up just 0.1 per cent on a day of mixed fortunes for its biggest stocks. Ryanair struggled, ending the session down 1.4 per cent at €15.50, as higher oil prices weighed on the airline and investors digested an analyst downgrade. By contrast, cement-maker CRH advanced 1.9 per cent to €27.82.

However, food group Aryzta lost 4.75 per cent to €18.25 as the market responded badly to the departure of European chief Dermot Murphy. Financial services group IFG ended 10.3 per cent lower at €1.65, on light volume, one day after it was announced that its chief executive and chairman are to step down.

Shares in Shire jumped 5.9 per cent as Botox maker Allergan and Japan’s Takeda Pharmaceutical entered competing talks to acquire it, in a deal set to top $60 billion (€48.6 billion).

Oil majors Royal Dutch Shell and BP were both up about 1.5 per cent as oil prices hit their highest in over three years after a report that top exporter Saudi Arabia was pushing for higher prices.

Engineering giant Weir Group jumped 6.2 per cent after the firm agreed to acquire US mining tools maker ESCO for $1.05 billion.

There was also disappointing news on the earnings front, though, with the results of Philip Morris in the US triggering falls across the tobacco sector in Europe. British American Tobacco and Imperial Brands shed 5.4 per cent and 2.9 per cent respectively.

Debenhams fell 5.7 per cent after the department store group cut its dividend and warned on its full-year outlook for the second time in four months.

Advertising group Publicis and industrial stocks led European shares on Thursday as strong results spurred them higher, but the main indexes stalled, showing signs of fatigue after a two-day rally.

Industrial groups also shone, with Swiss industrial equipment maker ABB rising 4.6 per cent after reporting its best start to the year since 2015, while rival Siemens rose 1.4 per cent.

Tech stocks also held the Stoxx back, with chipmakers AMS , Siltronic, STMicro, and ASML down between 3 and 6 per cent after Taiwan Semiconductor reported weaker than expected results.

US stocks were on track to end lower for the first time in four days as technology shares came under pressure from trade and earnings concerns.