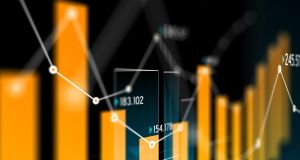 One of Draper Esprit’s investments in the 12 months to the end of March included an £18 million investment in cryptocurrency and blockchain security company Ledger. Photograph: iStock

Venture capital firm Draper Esprit has recorded 50 per cent growth in its primary portfolio as both its investments and the fair value of the portfolio increased.

In a trading update issued on Monday the company said it was seeing “strong growth within the portfolio” and as a result of that, directors anticipate the gross primary portfolio value to increase to £244 million (€282.3 million), up 50 per cent from £163 million value at the end of September.

The gross primary portfolio is the gross value of the company’s investment holdings before a series of deductions are made. Those deductions include and deferred tax of accrued carried interest. Carried interest is a share of the profit on the gain realised on the exit of those investments.

While investments of £71 million made during the year account for the majority of the increase, a fair value increase of £51 million in the six months to the end of March buoyed the overall value.

Over the course of the whole year, Draper Esprit recorded fair value growth of 66 per cent having made exits in the period from investments in Clavis Insight, Aveillant and Moviepilot.

The significant fair value growth, the company said, was driven by “continued strong performance across the portfolio with notable uplifts in the value of Graphcore, Lyst” and Transferwise.

One notable investment in the 12 months to the end of March included an £18 million investment in Ledger, a Paris-headquartered cryptocurrency and blockchain security company.

“We set ourselves a financial benchmark of continuing our 10-plus year track record of annualised returns of 20 per cent a year and are consistently achieving and exceeding this,” said Draper Esprit chief executive Simon Cook.

“As we continue to grow portfolio value with clear market leaders, and generate meaningful cash returns for our investors, we are demonstrating an ability to scale our model at an increased pace.”

Group cash at the end of the year was £56 million after the company made further investments to increase holdings in a number of companies including Trustpilot, an online review community.