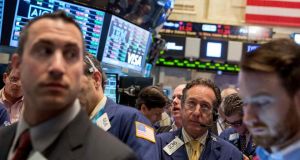 European stocks rose, with the region’s benchmark index capping its longest streak of weekly gains since November, as data showed a drop in German business confidence and a rebound in US housing activity.

National benchmark indexes advanced in 13 of the 18 western European markets yesterday. France’s CAC 40 added 0.3 per cent and Germany’s DAX rose 0.5 per cent to a record. The UK’s FTSE 100 slipped less than 0.1 per cent.

DUBLIN After a week of gains on foot of strong profit guidance following the publication of its annual results on Monday, Ryanair gave up some ground yesterday. The airline closed down 0.7 per cent at €7.149. Stockbroker Davy this week raised its price target for the stock to €8. Rival Aer Lingus headed in the other direction by closing up 1.8 per cent at €1.50. Smurfit Kappa was a big mover on the day, up 4.5 per cent at €17.15.

Total Produce was up just under 0.5 per cent yesterday at €1.08 on the day of its annual shareholder meeting. The fresh produce provider left its full-year adjusted earnings guidance range of 8.4 cent to 9.4 cent unchanged. The group said it continues to actively pursue acquisition opportunities to further expand in Europe and North America. Ryanair, Bank of Ireland, Kerry Group, Smurfit and CRH were the most traded stocks yesterday.

Tullow Oil fell 1.2 per cent to 841 pence. The oil exploration company said it found only traces of gas at its Shimela well in Ethiopia.

London Stock Exchange Group gained 2.4 per cent after Goldman Sachs Group Inc upgraded the shares to neutral from sell, citing cost synergies and business diversification related to its purchase of LCH Clearnet Group. Sports Direct rose 0.7 per cent to 774 pence, paring earlier gains of as much as 2.2 per cent.

The FTSE 100 Index slipped 4.81 points, or 0.1 per cent, to 6,815.75 at the close of trading in London. The benchmark posted a 0.6 per cent decline this week. The broader FTSE All-Share Index lost less than 0.1 per cent yesterday. The volume of shares changing hands in FTSE 100-listed companies was 32 per cent lower than the average of the past 30 days, data compiled by Bloomberg showed.

EUROPE The Stoxx Europe 600 Index added 0.2 per cent to 341.76 at the close of trading as investors also weighed the Ukraine situation before the May 25th presidential election. The gauge is trading less than 0.1 per cent below its six-year high, reached on May 13th, and posted its sixth straight weekly gain.

The volume of shares changing hands in Stoxx 600-listed companies was 25 per cent lower than the 30-day average for this time of the day, according to data compiled by Bloomberg.

In Germany, the Ifo institute’s business climate index, based on a survey of 7,000 executives, fell to 110.4 in May from 111.2 in April. Economists in a Bloomberg News survey predicted a drop to 110.9. Randstad climbed 3.1 per cent to €42.04. UBS said the company will witness profit growth if the economic recovery continues. NEW YORK The Standard and Poor’s 500 Index climbed to a record, closing above 1,900 for the first time, as Hewlett-Packard Co rallied and data showed purchases of new homes climbed in April.

The Russell 2000 Index of small companies increased 1.1 percent. Trading in SandP 500 companies was 32 percent below the 30-day average for this time of day. US equity markets are closed on May 26th for the Memorial Day holiday. – Additional reporting by Bloomberg