By Thanksgiving evening, US shoppers had splurged more than $1.52bn online 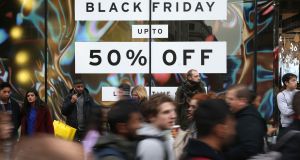 US stocks gained, with the Nasdaq and the benchmark S&P 500 hitting records, helped by higher commodity prices and with retail stocks getting a boost on signs of a strong Black Friday start to the holiday shopping season.

The Iseq nudged ahead by 0.3 per cent on thin trading volumes.

Betting-shop operator Paddy Power Betfair was one of the exchange’s strongest performers, up 3.1 per cent on a report that it may expand overseas to offset tougher gambling regulations in Britain. Along with UK rival William Hill, Paddy Power was reported to have held talks on a deal with Australia’s CrownBet.

Agribusiness Origin Enterprises, chaired by Rose Hynes, rose 1.2 per cent after a trading statement on Friday morning that predicted a near 4 per cent rise in first-half revenues.

A stronger pound helped to boost Bulmers/Magners cidermaker C&C, which rose by 1.7 per cent after a late afternoon price rally.

3i Group rose 1.7 per cent as Canaccord rose its target price for the listed private equity firm. Travel firm Thomas Cook jumped 4.7 per cent after it was reported it bid for failed rival Monarch Airlines’ landing and take-off slots at London Gatwick airport.

Among other mid-caps, pub operator Mitchells & Butlers which tanked on Thursday after reporting full year earnings, rebounded 3.8 per cent. Among housebuilders hit after poor mortgage data, Persimmon and Barratt Developments fell 3.6 per cent and 3.3 per cent respectively while Taylor Wimpey retreated 2.4 per cent.

Provident Financial also shed 1.9 per cent. The British subprime lender said executive chairman Manjit Wolstenholme died at age 53. The troubled lender had appointed Wolstenholme to the position in August, with the aim of turning around the group and protecting its franchises.

The export-heavy German DAX index advanced 0.4 per cent, shrugging off strength in the euro. The growing prospect of a grand coalition in Germany boosted sentiment.

While corporate news was sparse, shares in consumer staples businesses were in focus after China said it would cut import tariffs on some consumer products. Shares in Danone rose 0.7 per cent, while Diageo advanced by 0.3 per cent.

Banks were also in positive territory, up 0.5 per cent, with Italian lenders topping the index.

Shares in Banco BPM, BPER Banca and UBI Banca rose by 2.5-5.9 per cent after media reports that two European banking directives were in the works in Brussels, aimed at introducing looser rules on disposal of bad loans.

After two disappointing years, Black Friday crowds at stores in many locations around the US this year were reported to be strong, according to analysts.

The S&P retail index was up 0.63 per cent to a record high, led by Macy’s 4.3 per cent jump. The department store operator’s chief executive told CNBC the company was better off this year than last and was seeing very robust online demand.

Their biggest rival, Amazon, gained 1.7 per cent and provided the biggest boost to the S&P and Nasdaq. Surging online sales have eaten into the business of brick-and-mortar retailers. By Thanksgiving evening, shoppers had splurged more than $1.52 billion online, 16.8 percent higher than a year ago.

Oil prices jumped to a more than two-year high as North American markets tightened on the partial closure of a key pipeline linking Canada and the US. Exxon was up 0.4 per cent, while Chevron rose 0.6 per cent and was among the top boosts to the S&P and Dow.

1 Will Revenue come calling with tax bill if inheritance tax threshold falls?
2 Nigeria seeks more time to fight $9.6bn award to Irish businessmen
3 If tourists are such pariahs should we not be testing them on arrival?
4 Dublin banker sells island off coast of west Cork for €5.5m
5 Lidl goes to court over Aldi price survey
6 Owners of Cork shopping centre sue for €30m after car causes fire
7 ‘My rent here is so low it’s a joke’
8 Cairn Homes plan for former RTÉ site draws 19 objections
9 Norwegian airline sued in Dublin by inflight caterer
10 Majority of employees don’t want to return to pre-Covid working patterns
Real news has value SUBSCRIBE