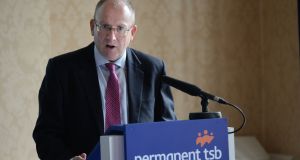 Jeremy Masding, group chief executive of Permanent TSB: the bank announced its first profit since 2007, bringing its stock up 4.73 per cent to €2.168. Photograph: Dara Mac Dónaill

A raft of earnings announcements helped boost European stocks, raising them out of a doldrum period that saw markets make few gains.

Permanent TSB surged by 4.73 per cent to €2.168 after the mortgage lender and retail banking specialist reported its first profit since 2007, the eve of the financial crash. The bank said it made an after-tax profit of €80 million in the first half of the year compared with a €140 million loss in the same period last year.

Other financial stocks benefitted from the news. Bank of Ireland climbed 3.26 per cent to close at 19 cent having traded at around 18.5 cent for most of the session. Hotelier Dalata added 3.68 per cent to end the day at €3.95. Traders said that it was one of a number of stocks that took a battering in the wake of the Brexit vote but which are now recovering some ground. Ryanair, which reported strong results earlier in the week, gained 1.09 per cent to close at €11.61.

Santander rose 4.4 per cent after posting profit that topped expectations. PSA Group rallied 9.3 per cent, leading a gauge of automakers to the best gain among industry groups, after the maker of Peugeot and Citroën cars reported a jump in first-half earnings. Aircraft manufacturer Airbus Group added 4.5 per cent as its earnings beat analysts’ estimates.

Apple suppliers Dialog Semiconductor and AMS rose more than 3.7 per cent after the US company said iPhone demand picked up. STMicroelectronics jumped 11 per cent as its earnings beat projections.

Deutsche Bank slid 3.2 per cent after saying profit was almost wiped out by a slump in trading revenue and costs tied to job reductions. Osram Licht sank 6.8 per cent after the lighting company posted a slump in net income. BASF fell 1.9 per cent after reporting quarterly profit that missed estimates.

Statoil dropped 1.5 per cent as it posted its first adjusted loss. UniCredit lost 4.1 per cent after people familiar with the matter said the Italian bank is considering a share sale and exit from Poland to raise capital. It also ended talks with Santander and private equity funds to combine the two lenders’ asset management units.

Earlier, shares of Boeing rose 0.8 per cent after the company reported a much small-than-expected loss in its core quarterly results. Helped by the airplane maker’s results, S&P 500 companies’ aggregate earnings are now expected to decline 3.0 per cent for the second quarter, compared with the 3.5 per cent decline expected a day ago, according to Thomson Reuters I/B/E/S.

Coke’s revenue miss and forecast cut sent its stock down 3.3 per cent, pulling down the S&P 500 index. In contrast, Apple Inc shares rose 6.6 percent after the company sold more iPhones than expected in the third quarter and gave an upbeat current-quarter forecast.