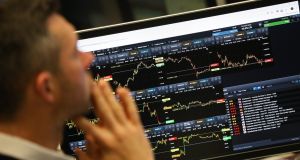 Shares recovered from the latest Brexit shock on Tuesday, aided by hopes that the US and China could strike a deal, avoiding a trade war

Shares recovered from the latest Brexit shock on Tuesday, aided by hopes that the United States and China could strike a deal, avoiding a trade war.

Building materials giant and index heavyweight, CRH, climbed 2.54 per cent to €22.58, clawing back some of the ground it lost on Monday.

House builder Cairn Homes climbed 4.89 per cent to €1.202, although dealers said that it was recovering from a recent run of bad days.

Ryanair gained 2.32 per cent to €10.82, bouncing back from a poor performance on Monday. However, traders noted that it was struggling to get back past the €11-mark.

Hotel group Dalata edged up 0.23 per cent to €4.32 although it drew bids of €4.34 during the day. Observers noted that decent amounts of the stock traded, with 1.62 million shares changing hands in Dublin.

Cardboard box maker Smurfit Kappa was another to retake some territory lost earlier in the week. The multi-national added 3.1 per cent to close at €21.92. Its shares fell 5 per cent on Monday.

Shares in advertising giant WPP surged after its chief executive, Mark Read, announced plans to cut 3,500 jobs and save £275 million (€304 million) a year.

Its shares climbed 8 per cent during the day before closing 4.84 per cent ahead at 844 pence sterling yesterday. WPP owns Ogilvy and J Walter Thompson which have offices in the Republic.

Metals and diamonds miner Anglo American advanced 5.5 per cent to 1,661.6p after chief executive Mark Cutifani said that production would rise 3 per cent next year and 5 per cent in 2020 and 2021. Rivals Rio Tinto and Glencore also rose.

Drug maker GlaxoSmithKline rose 0.7 per cent, tracking gains in its sector and following an upbeat note from analysts at investment advisors Jefferies on prospects for large-cap European pharma firms.

Fears of Brexit’s impact on lenders meant banks were a weak spot, with shares in Lloyds and Royal Bank of Scotland both hitting their lowest level since 2016. They ended down 1.1 and 0.3 per cent respectively. HSBC, which instead has a big presence outside Britain, rose 0.9 per cent.

European shares rose on Tuesday as optimism over the China-US trade dispute helped them recover from the two-year lows hit in the previous session.

The export-oriented auto and tech sectors were among the biggest gainers, both up more than 2 per cent, while materials stocks rose more than 3 per cent as the trade hopes boosted metal prices.

France’s CAC 40 was up 1.4 per cent after French president Emmanuel Macron pledged late on Monday to raise the minimum wage and cut taxes in a bid to prevent more violent protests that have rocked the euro zone’s number two economy.

France’s Suez, however, fell 2.8 per cent as a source said the board of French utility Engie decided to stick with its 32 per cent stake in the utilities group.

In Italy, Banco BPM rose 2.5 per cent after announcing it had agreed to sell up to €7.8 billion in bad loans along with a stake in its debt recovery business to Credito Fondiario and US fund Elliott.

Hopes of a resolution to the US-China trade dispute also boosted Wall Street. Adding to the optimism was a Bloomberg report that China is moving to cut import tariffs on US-made cars to 15 per cent from 40 per cent, which lifted shares of General Motors and Ford.

Pharmaceutical manufacturer Pfizer was down 1.67 per cent after a JP Morgan downgrade. iPhone maker Apple was off 0.28 per cent, while aircraft giant Boeing reversed course to drop 0.8 per cent. The trio’s poor performances curtailed gains on the indices.

Alphabet was up 0.43 per cent as Google chief executive Sundar Pichai started a congressional hearing saying the company currently has “no plans” to launch a search engine in China.