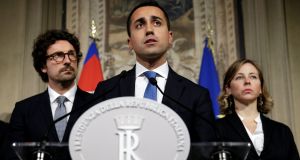 In Italy, investors on the Milan bourse were scared off after the country’s two anti-system parties made progress in forming a coalition – thus potentially freeing up billions for tax cuts and welfare.

Britain’s FTSE 100 was driven higher on the day after strong results from software company Micro Focus while in the US gains in retail pushed Wall Street higher.

A volatile day in Irish stocks saw the Iseq overall index close up 0.16 per cent with Paddy Power among the winners.

The Dublin-based bookmaker topped the Iseq 20, climbing 6.77 per cent to €93.90 on the day, after news overnight that the company is in talks to merge its US business with fantasy sports company FanDuel to target the US betting market.

On the other side of the index was Smurfit Kappa, down 5.18 per cent to €33.66. The Irish Takeover Panel gave the company’s suitor, International Paper, a three-week deadline to announce whether it will make a bid for the cardboard box maker. The Memphis-based company signalled it was ready to improve the value of its proposal, but wouldn’t consider a hostile takeover.

In a trading statement ahead of its annual general meeting (agm) on Wednesday, Permanent TSB said business and financial performance “continues to trend positively and in line with expectations”. Despite the positivity, the stock fell 2.91 per cent to €1.67 on very strong volume.

The FTSE 100 was up 0.2 per cent by the close, flirting with the record high reached in mid-January.

Micro Focus was top of the heap, jumping 6.2 per cent to a two-month high after the software company won a new $40 million licensing deal earlier than expected, saying it would bolster first-half revenue.

Homebuilder Crest Nicholson sank 12.8 per cent to the bottom of the FTSE 250 after saying rising construction costs were hurting the pricing of its homes, forcing it to cut its full-year operating margin forecast.

The pan-European Stoxx 600 index rose 0.2 per cent, hovering around its highest level since early February but Italy’s FTSE MIB fell 2.3 per cent, its worst fall since the election took place in early March.

Italian banks, seen as a proxy for political risk in the country, fell 3.68 per cent as borrowing costs jumped.

The recent surge in crude oil prices has helped the oil and gas sector rise 13 per cent so far this year, leading sectoral gainers in Europe.

A weaker euro provided support for dollar-earning European companies as the dollar extended its rally against a basket of currencies on Wednesday and touched a five-month high. Miners and the broader basic materials sector benefited from the trend and closed 2.79 per cent higher.

Among the other top gainers on the Stoxx was Homeserve which surged to 9.3 per cent after UBS upped its recommendation for the stock to “buy”.

Wall Street edged higher on Wednesday, helped by gains in retail and chip stocks, while investors weighed the impact of rising bond yields.

The retailing index was boosted by a 9 per cent surge in Macy’s shares after the department store operator reported strong quarterly results and lifted its full-year profit forecast. Shares of rivals Kohl’s and Nordstrom were up.