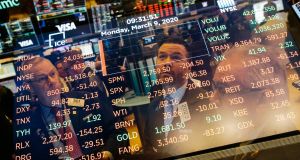 Travel stocks, automakers and banks led a slide in European shares on Wednesday as fears of a resurgence in coronavirus cases and a worrying outlook from the US central bank chief dented hopes of a swift economic recovery. The pan-European Stoxx index fell 1.9 per cent to hit a one-week low, with losses deepening after US Federal Reserve chair Jerome Powell warned of an “extended period” of weak growth and stagnant incomes due to the health crisis. Europe’s hard-hit travel and leisure index and auto stocks fell 5 per cent each, while banking shares slid 3.7 per cent. A batch of weak earnings reports added to the gloom.

AIB and Bank of Ireland enjoyed contrasting fortunes amid nervy market moves. AIB rose nearly 6 per cent to 91 cent after chief executive Colin Hunt announced this week he would seek deeper than expected cutbacks across the bank’s operations here, including up to 1,500 layoffs over the next two years. Bank of Ireland, in tandem with other European financials, fell nearly 4 per cent to €1.33.

Share in Swiss-Irish baked goods group Aryzta sank a further 12 per cent to 33 cent, marking a near 97 per cent collapse in the share price since 2015. The latest shift came as activist investors Veraison and Cobas Asset Management teamed up to call for further changes in the way the company is being run.

Insurer FBD sank 2.6 per cent to €6.78 after it emerged a prominent Dublin pub had launched a legal action against it on foot of a business interruption in policy.

Ryanair was down nearly 3 per cent to €8.82 amid the deteriorating outlook for the travel sector.

The London markets lost some of their recent steam as they closed in the red on the back of news that the economy shrank by 2 per cent in the first quarter of 2020. The Office for National Statistics (ONS) revealed activity plunged 5.8 per cent in March in the biggest monthly fall since records began in 1997, putting the country on the path to a recession. The FTSE 100 closed 90.72 points lower at 5,904.05p at the end of trading on Wednesday. Connor Campbell, financial analyst at Spreadex, said the index could have seen a “far greater” decline, given the fall in GDP, but shared a lot of the paid with sterling during Wednesday’s session.

Travel and aerospace firms had a disappointing trading session again, with cruise firm Carnival, British Airways and Aer Lingus owner IAG and Holiday Inn operator Intercontinental Hotels all falling. It came after rival Tui said it is looking to cut up to 8,000 roles worldwide in response to the coronavirus crisis. The UK’s largest tour operator posted losses of €845.8 million in the first half of the current financial year. Shares in Tui slid by 4.3p to 260p.

Shares in Germany’s Commerzbank fell 7.1 per cent and Dutch bank ABN Amro dropped 9.1 per cent after swinging to a loss in the first quarter as the pandemic drove up loan loss provisions. Deutsche Bank sank 6.4 per cent on news that top managers will waive one month of fixed pay in an effort to cut costs. Shares in Exor, the holding firm of Italy’s Agnelli family, fell 7.2 per cent after French insurer Covea walked away from its planned $9 billion purchase of PartnerRe, the Bermuda-based reinsurer owned by Exor.

European shares have reversed some of the strong recovery gains made in April, as South Korea, Germany and China reported a rise in infections after easing their restrictions and a top US health expert warned against easing lockdowns too soon. “The correction could continue for a few weeks,” said Simona Gambarini, markets economist at Capital Economics. “There are worries about easing of lockdowns being premature in certain countries, a second wave of contagion, weak economic data and tensions between the US and China.”

US stocks fell sharply for the second day on Wednesday after Federal Reserve Chairman Jerome Powell warned of an extended period of weak growth and stagnant incomes due to the coronavirus pandemic, dashing hopes of a quick economic recovery. It will take some time for the US economy to get back to where it was, Mr Powell said in a webcast, as he pledged to use the US central bank’s power as needed and called for more fiscal stimulus.

Interest rate-sensitive bank shares shed 4.4 per cent, tracking a fall in US Treasury yields. Royal Caribbean Cruises Ltd launched a $3.3 billion bond offering, pledging 28 of its ships as collateral and forecast heavy losses for the first quarter, sending its shares down 4.7 per cent. – Additional reporting by Reuters