Markets back to business after holiday season 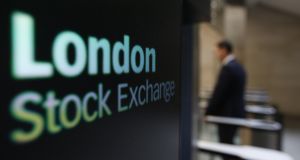 The Iseq index of Irish shares rose on the first day of trading in 2017 to its highest level in almost a year, recovering some of the ground lost last year in its first annual decline since 2010.

Origin Enterprises gained 5 per cent, while Bank of Ireland and Permanent TSB were each about 2.5 per cent higher and Smurfit Kappa advanced at a similar pace.

The Iseq had lost more than 4 per cent during the course of 2016.

Strength in financials and commodity-related stocks continued to underpin European equity markets with Britain’s FTSE 100 starting the new year at a record high.

Among individual stock movers, Italian banks were once again among top risers, with newly-merged Banco BPM gaining 4.6 per cent on its second day of trading, building on a strong rise in the previous session.

Shares in British retailer Next were under pressure, however, after Deutsche Bank downgraded its rating on the stock to “hold” from “buy”.