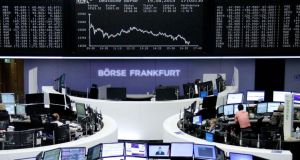 Traders are pictured at their desks in front of the DAX board at the stock exchange in Frankfurt, Germany, yesterday. Photograph: Reuters

The Iseq slumped by 1.2 per cent as a worsening rout in emerging markets and a plunge in oil sparked a broad selloff in US and European stocks. Concern among investors grew that global growth is slowing at the same time the Federal Reserve is setting plans for higher interest rates.

News that German MPs had voted to back a third bailout for Greece also had little positive effect on European markets, with the focus firmly on fears of a fresh slowdown for the global economy as China battles with plunging exports and white-knuckle stock-market moves.

Its performance was boosted by the strong dollar, as Glanbia has invested heavily in US nutritional businesses in recent years. With the dollar set to rise along with US interest rates, Glanbia could benefit when it translates earnings back into its home currency.

FBD, the general insurer, fell 0.5 per cent after a late afternoon sell-off to close at 34 cent. A Merrion analyst suggested that it may look to sell €75 million of subordinated debt. The company reportedly must raise up to €100 million to meet new solvency rules.

The biggest drag on the Iseq came from a poor performance by its biggest weighted stock, the building materials giant CRH. It fell more than 2.5 per cent, after opening down and staying there.

The stock is particularly sensitive to projections of global slowdown, although analysts believe it will meet expectations when it reports results next week.

Only a handful of stocks in the blue-chip FTSE 100 index rose.

Admiral Group climbed 3.8 per cent after posting an increase in earnings and number of customers.

Hikma Pharmaceuticals added 2.6 per cent after its chief financial officer said it would consider another large deal when debt is paid down.

Among stocks moving on corporate news, Carlsberg tumbled 9.2 per cent after the world’s fourth-biggest brewer reported second-quarter profit that missed estimates, and forecast a drop in annual profit.

Caterpillar, DuPont and Freeport-McMoRan paced declines as raw-material and industrial shares slumped more than 1.2 per cent as a group. Energy shares tumbled the most since January as an unexpected increase in US crude stockpiles sent oil prices deeper into a bear market.

Target was little changed at $80.06 after the retailer reported a larger-than-expected rise in quarterly earnings.

1 Lockdown exit: How can Irish economy reopen without big health risks?
2 I want to change my will quickly in case I fall ill. Do I need a lawyer?
3 Property market has not felt full impact of Covid-19, warns Sherry FitzGerald
4 Toast believed to have cut its Dublin staff by 50%
5 EU ministers fail to agree virus economic rescue in all-night talks
6 Finance ministers gather as fears grow even the future of the euro zone is at risk
7 Fierce backlash to Dutch hard line on eurobonds
8 Brighten up your stay at home experience with artwork from Behance
9 Q&A: Where do we stand on mortgage holidays and payment breaks?
10 Aldi offers priority access for front-line workers at its Irish shops
Real news has value SUBSCRIBE